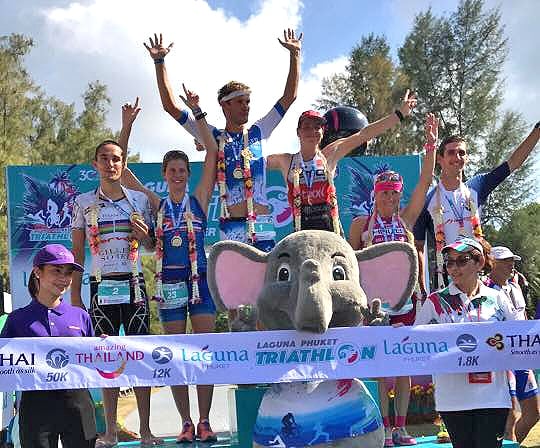 37 year old Raelert came from behind in the swim to stay neck and neck with arch-rival Anthony Costes of France in the concluding run before speeding up at the end to cross the finish line in 2:19.32 hours and complete a hat-trick of Phuket wins.
Costes, who was runner-up to the German last year, again had to settle for second, in 2:20.29.

“Actually I’m really happy but my happiness is hidden because I had to suffer for it,” said the Phuket-based Raelert, who has won four titles this year, including another win in Thailand at Bang Saen, Chon Buri.

“I had to give everything I had, all my energy. It was a tough race, really hot and with strong competitors. I will need a few days to recover.

“During the first few kilometres of the run, my legs felt tired. I was unable to go as fast as I wanted. So Anthony and I were neck and neck,” the German recalled of the final phase of their battle.

“In the end we both really suffered and didn’t run fast at all. I think we were too tired to think about our positions. We just wanted to make it to the finish line,” added the three-time champion from the coastal city of Rostock in north Germany.
His next mission is to take part in the next week’s Ironman 70.3km Asia Pacific Championship in Sydney, followed by the year’s finale in New Zealand.

“Next year the big goal will be Kona (the Ironman World Championship). I will try to fulfill my dream by competing in Kona and hope to win,” he concluded.

Posted by The Nation Bangkok on Saturday, November 18, 2017

Watkinson, 26, dominated her event from start to finish to win her second straight crown here after timing 2:35.01 hours, followed by Imogen Simmonds of Great Britain with 2:41.47.

“It’s a real pleasure to win for the second time on this course. It’s a good warm-up for next weekend,” said the Auckland athlete, who also trains on the southern island.

“I had a really strong swim coming to the transition first. That gives you a bit of confidence. I tried to make sure nobody caught me on the bike. I was confident that if I started the run ahead of others, I would be able to have a strong run there,” added Watkinson, hoping to carry this winning momentum going to the last two races in Sydney and at home in Taupo.

“Next week will be a tough one.  It’s quite a prestigious event. It will be nice to do well in your own region.”

Posted by The Nation Bangkok on Saturday, November 18, 2017