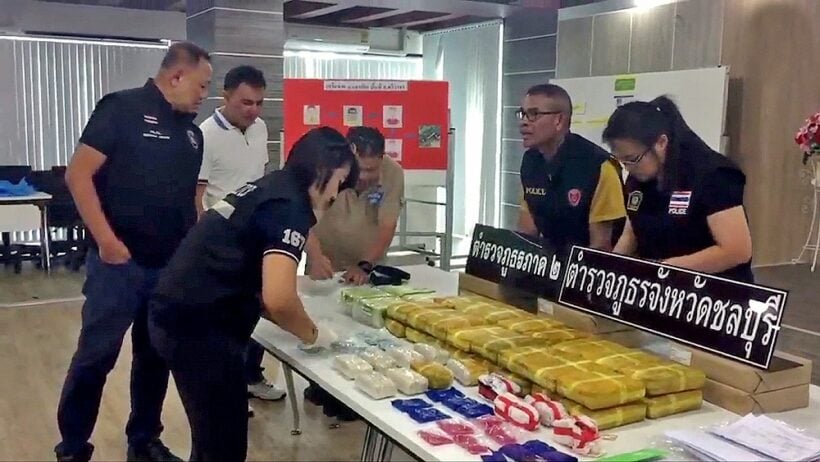 A police sting operation led to the arrest of three young male suspects and the seizure of 218,000 methamphetamine pills, 4,150 grams of crystal methamphetamine or “ice” and 700 Ecstasy pills in Chon Buri province’s Sri Racha district.

Police Region 2 chief Pol Lt-General Jitti Rodbangyang told a press conference on Sunday that the suspect, 22 year old Saran Silarak, and two accomplices aged 17 and 15 (whose names were withheld due to their age), were initially charged with possessing narcotics with the intent to sell.

Jitti said the police sting operation, conducted on Friday afternoon, sought to buy 2,000 methamphetamine pills from Saran and a Thai woman identified only by her nickname, Nam. The pair then arranged for the two teens to deliver the drugs at an agreed location in Soi Sri Racha-Nong Khor in Tambon Surasak.

Police arrested the two teens and extended their search to a dormitory in Soi Ban Hin Perng of Tambon Bang Phra where the officers found 216,000 methamphetamine pills, 4,150 grams of “ice” and the 700 Ecstasy pills. A subsequent stake out at the dormitory led to Saran’s arrest.

Jitti said Saran reportedly confessed to police that he had been hired by a Bangkok resident identified by the nickname Ta to move methamphetamine pills around, and he had delivered them to customers six times before. He was paid about 40,000 baht on each occasion.

He said this was the first time he had been arrested on drugs charges.