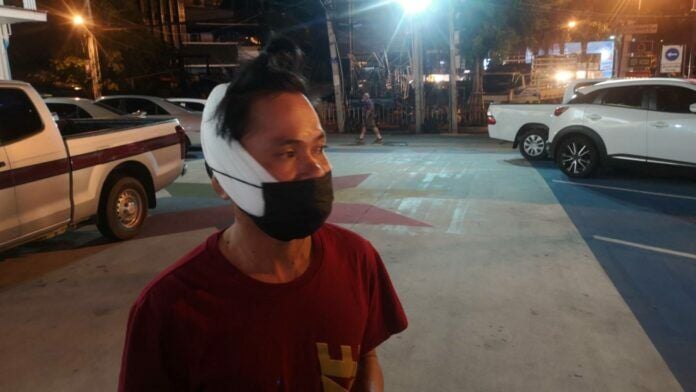 Kongnouanhak Dang was found with a head injury, photo by The Pattaya News.

Chon Buri’s Bang Lamung district is always buzzing about with drama it seems.

A man in Bang Lamung said yesterday that his next-door neighbour hit him in the head twice with his motorbike helmet, after he went to the neighbour’s room to ask him about a Lazada delivery he was waiting for. The victim, 34 year old Kongnouanhak Dang, was found with a head injury. Rescue workers treated him before bringing him to the Pattaya police station for a formal statement.

The police said the cause of the assault is still being investigated, and that they planned to summon the suspect for interrogation. The police were notified about the attack early yesterday morning.

A string of violent assaults happened in Bang Lamung district last week. A man in the district allegedly assaulted another man who he said mocked his girlfriend’s looks. A video by an eyewitness reportedly shows the suspect, 23 year old Kittithat Thongtae, and his girlfriend, charging at a motorcycle taxi rider and beating him, while others try to stop them. Police found the victim, 52 year old Chuchat Pansri, with several injuries.

Just a day before that, another man in Bang Lamung allegedly pointed a gun at his ex-girlfriend’s face in the middle of a street. The 18 year old woman and her 22 year old sister said the ex-boyfriend followed them on a motorcycle before he pointed the gun at her face, bringing up their personal history.

HolyCowCm
Seems like not much @ 10,000 baht, but to many this is a lot. Still someone is dead over 10,000 baht and that really makes life cheap.

IneptoCracy
Sad when this happens, but we are seeing and reading more about these lenders either shooting the person who can't repay all their debt at once, or as in this article the debit collector being shot dead. More and more…