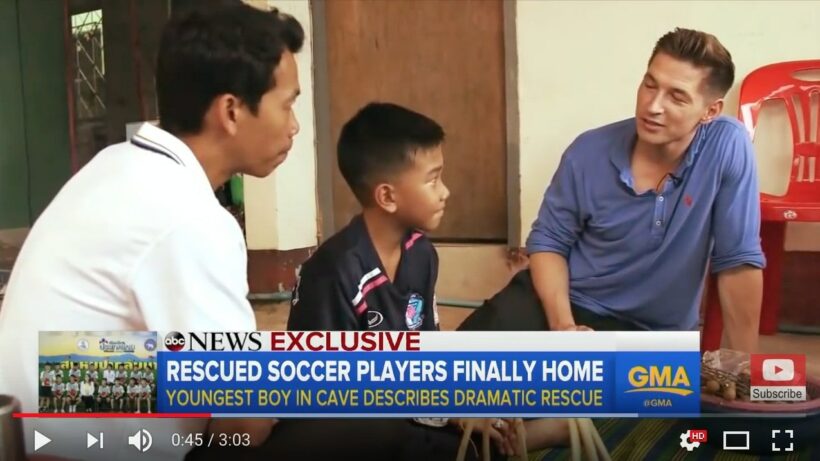 The Mu Pa 13 spoke to the Thai and world media on Wednesday night in a one-time-only media conference. Authorities said that it was now time to leave the team alone and let them re-unite with their families and friends, and get back to their studies and football.

The media have mostly respected the wishes and left the team alone – a threat from the Thai Government to prosecute them under Child Protection Laws helped. But there was always going to be the temptation to get the ‘story’. America’s ABC News were the first to transgress on the Government’s and medical authority’s wishes. But there have been other foreign journalists trying to contact members of the team too.

The Justice Department’s deputy permanent secretary Thawatchai Thaikhieu has expressed disappointment at the conduct of some foreign journalists who are defying advice of psychiatrists and child welfare officials against interviewing the young members of the Wild Boars soccer team after they were discharged from the hospital.

“Some foreign media have acted below the professional standard which is something regrettable and unforgivable,” said Mr Thawatchai. He was apparently responding to an interview that a correspondent of ABC News had with one of the young survivors from Tham Luang cave.

Thai PBS are reporting that the interview has created an uproar on Thai social media after it was aired last night, prompting calls for Thai authorities to take action against the American journalist.

“It is regrettable that foreign media that should be aware of the convention on children’s rights and the process to protect children and youths turnde out to have lower standard than we think. It appears as if they lack common sense and sense of responsibility despite the fact that Thailand has put in place a system to protect this group of children,” wrote Thawatchai in his post.

Child welfare officials and psychiatrists have urged the media to stay away from the 12 young footballers to avoid pressuring them to answer questions that might force them to revisit their harrowing experience.

Here’s the ABC News interview, conducted against the wishes on the Thai Government and officials.