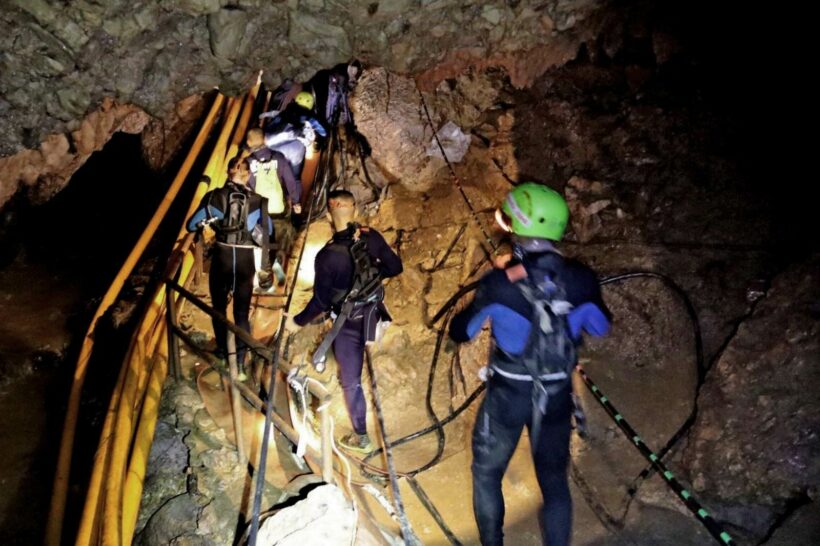 Evacuations are now well underway in day two of the process to extract the 13 players from inside the cave. Four were extracted from the cave last evening, according to an official announcement by former Governor of Chiang Rai Narongsak Osottanakorn.

Yesterday divers and rescuers succeeded in recovering four of the 12 young players after divers headed into the cavern, prepared for anything. The first team-member emerged at 5.40pm, the second at 5.50, the third at 7.40pm and the fourth at 7.50pm.

Narongsak says today’s operations started about two hours earlier than was expected, after all the preparations were made including getting replenished oxygen tanks into the cave at strategic locations.

According to a media briefing today, Narongsak says the diving team required about 20 hours to check equipment in readiness for today’s second attempt at evacuations. He also noted that the divers needed to rest after a strenuous and stressful, but successful, Sunday.

The 12 players and their assistant coach were trapped inside the cave on June 23 when a flash flood blocked their exit route. The group took shelter on a mud-covered rock ledge called Noen Nom Sao, about four kilometres from the entrance to the Tham Luang caves.

The Governor noted that it takes divers around 11 hours for a roundtrip journey inside the cave system.