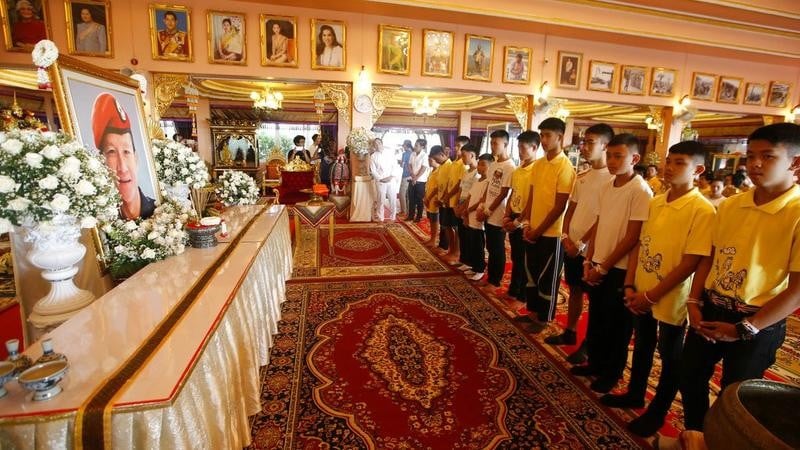 Thai PBS is reporting that members of the Mu Pa soccer team, along with their coach, attended a traditional blessing ceremony at a local temple in Mae Sai District, Chiang Rai this morning.

Nine soldiers entered the monkhood as a dedication to former SEAL member Saman Gunan who died while taking part in the massive rescue operation to retrieve the young footballers trapped in Tham Luang cave.

The Lanna style ceremony was conducted at Wat Phra That Doiwao by 12 monks who included a prominent monk from neighbouring Myanmar to bless the young survivors of the Tham Luang cave saga with good fortunes and longevity.

The Wild Boars boys, who were discharged from Chiang Rai hospital yesterday, also attended a religious ceremony dedicated to ex-Navy SEAL Samarn. The ceremony was also joined by nine soldiers from the 3rd Infantry Battalion who were earlier ordained at another Buddhist temple as a dedication to Saman.

Meanwhile, 11 of the 13 Wild Boars rescued from Tham Luang plan to enter monkhood as a tribute to Samarn on July 23. The two others will not join the ordination as one of them is a Christian and one a Muslim.

Coach Ekkapol Chanthawong reportedly will be in monkhood for three months, while 10 members of the Moo Pa Academy football team will be ordained as novices for nine days.

Foreign media slammed for intruding on the Mu Pa 13

The one hour expedition that lasted three weeks