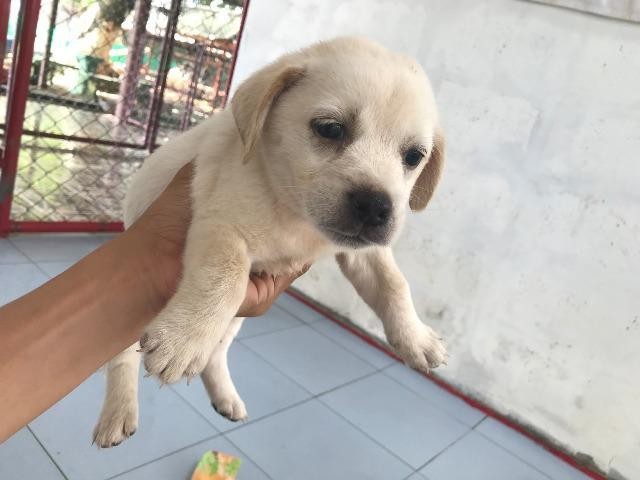 Phuket is seeing a positive trend in the number of adoptions from locals and Thai citizens over the years; encouraging as Thai people used to be only interested in pure breeds, sometimes even choosing dogs that are not comfortable in the climate of Thailand (like Huskies).

Meet Kittipong Tongwon, nicknamed K. Aof, who recently adopted an 8 week old puppy from the shelter. While visiting the Soi Dog foundation, K. Aof couldn’t look anywhere else but the tiny puppy, who he adopted on the same day and is now living at his home with the other members of his family.

‘Bodin’ is a mixed-breed puppy, the same kind you can see everywhere in the streets of Thailand. He was found with his other two siblings on the side road of Kathu, all very weak and tired when they were found. As there was no mother in sight, the person who found them knew they’d been dumped. All the puppies were brought to the Gill Dalley’s Sanctuary, where they received appropriate treatment and cuddles from the vets, until they became healthy and strong, all ready for adoption.

Bodin was the first lucky one to have found a forever home. Soi Dog say that it’s good to see that many other locals are now visiting the Foundation in hope of adopting a loyal friend, as all the dogs rescued at the Foundation are healthy and ready to be loved, all free of charge. It is also perceived by many Thais as a way to make merit by providing those animals with a house and family for them to play with and be loved.

This upward trend is also supported by celebrities in Thailand, such as Metinee “Loukkade” Sharples, who recently adopted a puppy from Soi Dog, or actor and model Nadech Kugimiya, who adopted a three-legged puppy he found injured in the bushes on the side road.

In one of his columns in the Manager Newspaper, Wanlop Chearavanont mentioned a conversation he had the pleasure to share with HM The Late King Rama 9, Bhumibol Adulyadej, in which The King told him that “Thai dogs are actually smart and strong like full breed dogs. If you give them a chance and take care of them well, teach them and train them, they will behave extremely well.” Just like Khun Tongdaeng, King Rama IX’s dog, which wasn’t a full breed or pedigree dog.

The Late King Bhumibol was also a strong advocate of the stray dogs issue and mentioned that “the stray dog problems would be gone if everyone would adopt a stray rather than buying a full breed.”

To find out more or find a new forever-friend, dog or cat, go to soidog.org