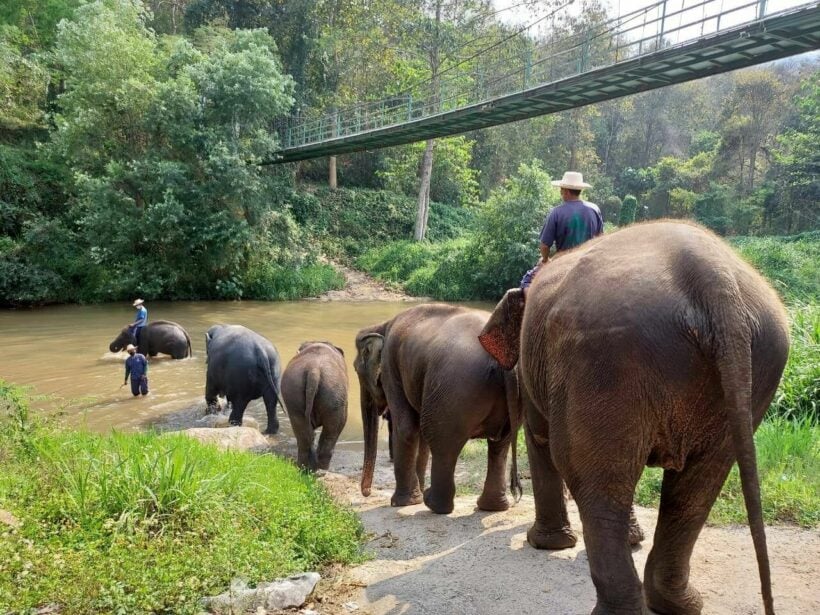 Elephant parks and sanctuaries relying on foreign tourists for an income and funds to feed the animals have been hit hard during the pandemic. One elephant park in Chiang Mai is now up for sale due to the drastic drop in the number of visitors over the past two years. The owner says she’s been unable to afford the 2 million baht per month needed to care for her camp’s more than 40 elephants and pay the staff.

The owner of Mae Taeng Elephant Camp in Chiang Mai made the announcement on Sunday, which was National Elephant Day. The observance aims to raise awareness about the conservation of Thai elephants and in remembrance of the day the Royal Forest Department designated the white elephant as Thailand’s national animal. While elephant camps and sanctuaries across Thailand celebrated with fruit buffets for the animals, Mae Taeng Elephant Camp had to say goodbye to their elephants.

Wassana Thongsook, who has been running the camp for 28 years, told Thai media that she has over 40 elephants and needs to spend over 2 million baht per month to care for elephants and pay the staff. She says she’s spent all of her savings and hasn’t had support from the state during the pandemic.

Wassana says she hasn’t thought of a set price to sell her 160,000 square metre park and dozens of elephants, but she says one qualification is that the buyer must be an elephant lover. She says the money isn’t important, but the elephants’ lives are. If she’s unable to sell the park, Wassana says she will continue taking care of the elephants and is willing to sell her assets, like her house and car, to be able to afford care for the elephants.