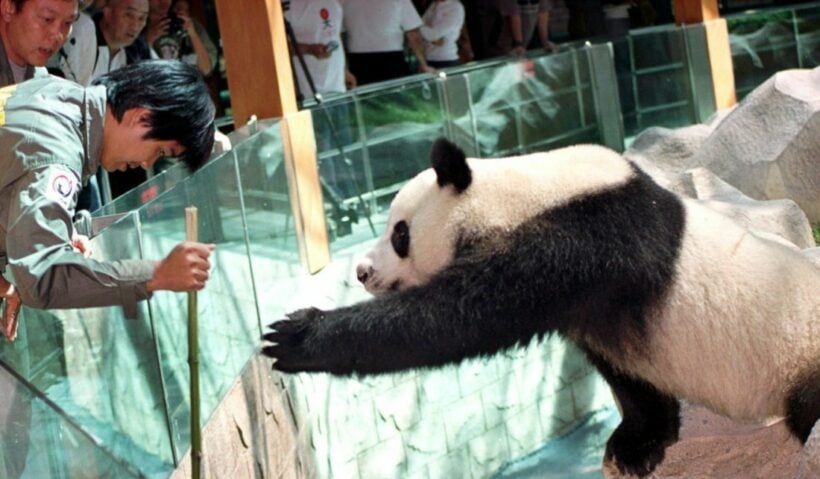 Chiang Mai Zoo have announced the results of an autopsy to determine the cause of death of celebrity panda Chuang Chuang. They announced the cause was heart failure. Special ‘panda vets’ from China flew into Chiang Mai last month to assist with the investigation into the death of the much-loved Panda who had been living at the Chiang Mai Zoo for most of its 19 years.

In the wake of the mysterious death millions of social media users in China demanded to know “What killed Chuang Chuang?” Chinese social media, bearing a hashtag blaming Thailand for the death, was viewed 250 million times.

Pandas can be expected to live up to 30 years in captivity.

The Chiang Mai Zoo hit back at speculation in China that Chuang Chuang, who was equally famous for being fat as he was sexually-shy. Chinese media was saying he may have died due to “careless feeding, neglect or even some kind of attack”. But the Chiang Mai Zoo authorities now say the autopsy showed that these claims were unfounded.

Chuang Chuang was put on a diet in 2007 when the zoo was trying to encourage he and Lin Hui to make baby pandas. Lin Hui eventually gave birth in 2009, their offspring was featured on a 24-hour Panda Channel shown on a Thai TV network.

“The autopsy and analysis by Chinese-Thai experts showed that the nutrition health of Giant Panda Chuang Chuang was good, no external wounds were found and no foreign objects were found in his trachea.”

“The cause of his death was heart failure, resulting in the lack of oxygen of internal organs and leading to his death.”

Soon after Chuang Chuang’s death last month photos of Lin Hui sitting alone in her enclosure next to Chuang Chuang’s empty pen was posted around the world and there was talk she may be returned to China amid concerns she would be lonely.