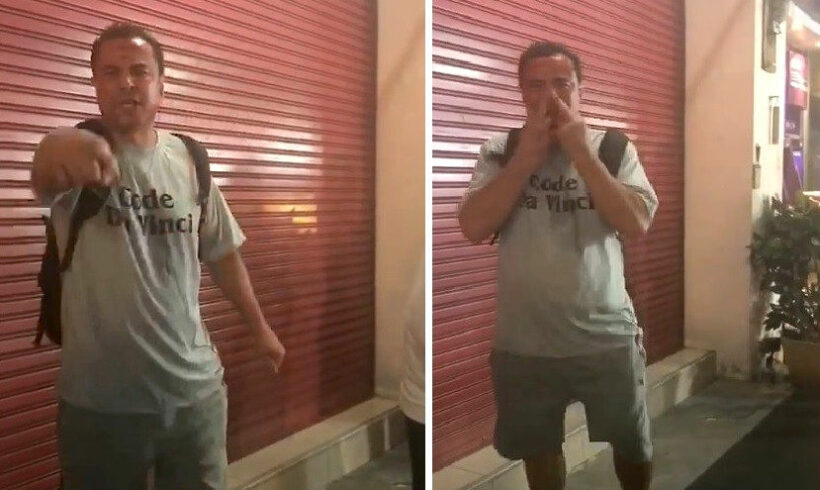 An apparently drunken American has smashed a shop window in Chiang Mai while ranting racist and offensive slurs at onlookers. His outbursts were filmed and widely posted on Facebook. According to a witness, she was minding her own business in front of the shop she was working in when the American began shouting and screaming at her.

“I kill people, I rape children, I kill faggots.”

The witness called police who arrived to find onlookers being verbally abused and threatened by the man.

She posted the video on Facebook, showing the American spewing racist and homophobic rants, threatening to kill and rape her and the other bystanders.

Bystanders appeared calm as they waited for authorities. They believed the man was mentally ill since he was sweating profusely and pacing about. At one point he began dancing and spitting at the crowd of onlookers.

“Put me on YouTube and make me famous,” the man said as police arrested him.

After the video went viral, people alleged this same man had already been guilty of similar offences.

Some claimed he had damaged other businesses around Chiang Mai, including a McDonalds restaurant. Some remarked that he must be mentally ill, but others thought his behaviour stemmed from a desire for a free ticket home.

UPDATE: The witness updated her Facebookpage saying the man has now been released and is awaiting a court date in December. He has been identified as 46 year old Daniel J Franckowiak.

8,600 lanterns to be launched during Chiang Mai’s Yi Peng festival

How to celebrate Loy Krathong or Yi Peng in Chaing Mai