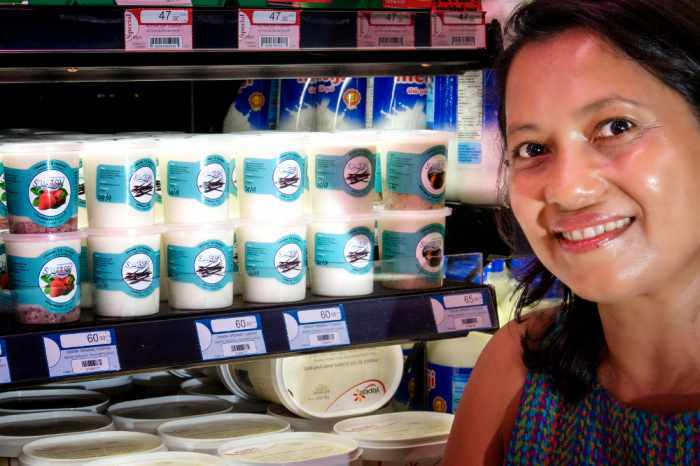 PHUKET: Based in a small house in Nai Yang, Premchit Prateap Na Thalang has been feeding Phuket all-natural organic yogurt since 2012. Produced under the Swash brand, Ms Premchit and her two employees manage to dole out about 3,000 cups of the healthy snack each week.

“My background is that I grew up in the jungle… in Khok Kloi [in Phang Nga]. My father marched me up into the mountain forest with him every weekend since I was five years old… He was a monk in the monastery for seven years where he learned to make traditional medicines. After each mountain trip with my father, my mother taught me how to make delicious wild foods and beauty potions. My father and mother taught me everything they knew about living with and off the natural world.”

Ms Premchit was taught how to make yogurt about 15 years ago by her Australian husband’s family.

“Inspired by [my husband] Norman’s parents, they told me, ‘You should make natural yogurt yourself, there’s no need to buy it’,” she explained.

Fast forward 10 years when word got out about her homemade yogurt at her son’s school in Bangkok. A little taste was all it took to whet appetites and convince her to sell it.

Shortly after, Ms Premchit broke into the commercial market when international schools, food delivery companies and hotels around Bangkok began buying her yogurt.

Following a move to Phuket in 2012, Ms Premchit got down to business, developing the Swash brand along with a selection of all natural fruit and nut snacks.

“We launched the snacks and the yogurt at the same time in 2012 – we started in Phuket and mostly sold directly to hotels,” she explained. A multitude of resorts in Phuket, including the JW Marriot, Trisara and Six Senses, all carried the Swash brand of yoghurt at one point.

Seeking a more consistent outlet for her products, Ms Premchit managed to put Swash on the shelves of Villa Market in Chalong and Cherng Talay, a move that immediately proved to be a success.

“In Villa, we have been the number one selling yogurt from our first day,” she said proudly.
“The customers at Villa are the right consumers for [our] products. The people who shop at Villa are health conscious and have the budget to spend [money] on a high-quality organic pro-biotic yoghurt.”

Currently, the Swash team meets production needs by fermenting three batches per week offering a dozen natural, and often locally sourced, flavors at both Villa Market outlets in Phuket – but growth is imminent.

Due to Swash’s popularity and Ms Premchit’s ability to keep production consistent, coolers at Villa Market stores throughout Bangkok will be stocked with Swash yoghurt by the end of the year. The expansion will necessitate quadrupling the current production.

“We, here in Phuket, try and find locals producing something special. Of course, it has to be something that we are sure they can produce enough of. It has to be a certain standard,” said Villa Market’s business development manager, Stefan Cariola.

Although Swash – whose name is derived from the term for turbulent water that washes up onto the beach – comes in 12 flavors, Ms Premchit takes advantage of the seasonal bounty of fruits and herbs that the area offers. Available now in limited quantities is a wild velvet tamarind with the next special release to be a Marian plum and ginger medley.

“Some yogurt companies add thickeners, additives and preservatives, but our yogurt is natural and organic with no additives and minimal sugar,” Ms Premchit noted.

Although Ms Premchit’s childhood was spent foraging in the jungles learning the best foods and medicines nature provides, she succumbed to the allure of the city and found herself attending university in Bangkok.

Seemingly paradoxical to her relationship with nature, she spent seven years as regional manager for McDonald’s. She asserts that it was an invaluable experience to learn the workings of a large company – knowledge she can now apply to the growth of her own business.

Now, she has come full circle, back to Southern Thailand where she’s from, and back to the natural foods she was raised on.