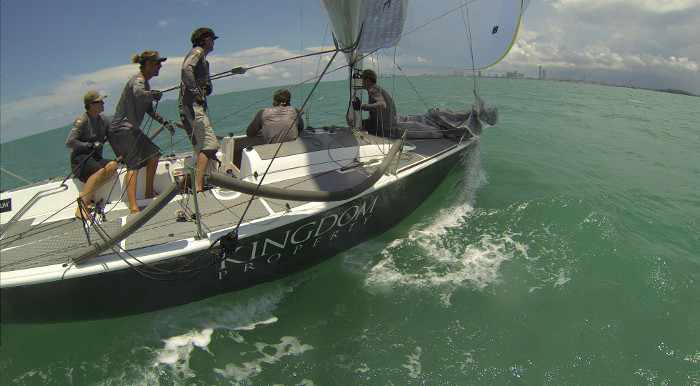 The championships, raced over August 16-17, saw nine teams compete in the identical class of Platu yachts, known elsewhere in the world as Farr 25s, after their designer Bruce Farr.

Day one started in light winds of 6-8 knots with Tim Brown’s The Weasel getting off to flying start, winning the first race of the day with Tom Spithill on Peter Winter’s Easy Tiger placing second and Duncanson’s Kingdom Property finishing third.

An afternoon thunderstorm saw the already light breeze moderate further to around four knots, race three became somewhat of light-wind lottery. This proved to be a good opportunity for the light air specialists to mix up the leader board, and SEA games gold medalist Wiwat Poonpat led the fleet home on Ithinai Yingsiri’s Platu 257 with Pote Suyasin’s Platu 122 in hot pursuit.

A fourth race was scheduled, but with the wind fading fast, Principal Race Officer Chris Dando sent the fleet back to the Ocean Marina for some well-earned refreshments.

The breeze stiffened to eight to 13 knots on day two, and with three races remaining only one point separated Kingdom Property and The Weasel.

Duncanson won the start of race four and excelling in the fresher conditions lead around every mark to win by 28 seconds.

The Weasel fought back to win the start of race five, but Kingdom Property had found an extra gear and slowly crept into the lead by the first mark rounding.

Loose covering tactics by Kingdom kept their noses in front around the course to claim back-to-back victories.

The final race got underway with the regatta leaders Kingdom Property and The Weasel opting for different ends of the start line.

Shortly after the start signal sounded a second signal was heard announcing a premature starter.

The Weasel returned immediately to re-start and a not-so-sure Kingdom Property reluctantly returned as well. From there, both teams played catch-up for the remainder of the race, but it was Platu 117 helmed by 17-year-old Dylan Whitcraft that went on to win the race, with The Ferret and Easy Tiger in second and third places, respectively.

Although Easy Tiger placed third overall, the crew won top honors for the regatta, as they had maintained the last-minute requirement of the majority of a boat’s crew having to be Thai nationals in order to qualify as “Thai champions”.

Previously, to be granted top honors, the majority of a boat’s crew had to have been residents in Thailand.

To Easy Tiger’s credit, four of the boat’s six-man crew were youngsters from the Royal Varuna Yacht Club in Jomtien.

The fourth and final regatta of the 2014 Championship, The Platu Cup, will be raced from Ocean Marina on October 17-19.