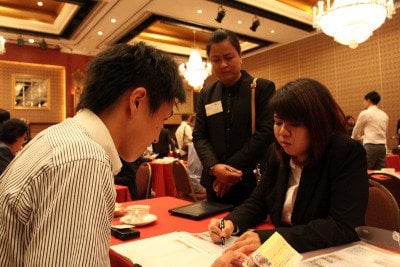 PHUKET: Recently returned from a week-long tourism fact-finding tour in Japan, Phuket Governor Tri Augkaradacha has told the media that the “Amazing Thailand in Japan” roadshow impressed the Japanese tour operators in the three cities they visited.

Organized by the Tourism Authority of Thailand (TAT) and coordinated by the Phuket Provincial Administration Organization (PPAO) and the Phuket Tourist Association (PTA), the roadshow visited Fukuoka, Osaka and Tokyo from July 21-28.

Gov Tri said that 21 tourism representatives from Phuket together with others from Bangkok, Chiang Mai, Lampang and Mae Hong Son went on the trip.

“Phuket tourism received a lot of attention and positive feedback from tourism representatives in all the cities we visited, especially Tokyo. More than 212 representatives attended the Phuket roadshow in Tokyo, 100 attended Osaka and 57 in Fukuoka.

“Following a decrease in tourists after the tsunami of March last year, it’s good that more Japanese are now traveling,” he added.

PPAO President Paiboon Upatising said, “The roadshow visitors I spoke to were impressed, especially in Tokyo. We can now look forward to the next road show which will be in October at the IBT Asia [travel trade] fair in Singapore,” he added.

“With more flights to Phuket and special promotions on regular flights, such as the Fukuoka-Tai Pei-Phuket and Fukuoka-Bangkok-Phuket flight routes, plus a strong yen, we expect more Japanese tourists to Phuket,” he explained.

“A lot depends on how tour operators manage their promotions to support the new market. Some already have business partners and roadshows can allow them access to new partners in Japan,” Mr Bhuritt added.