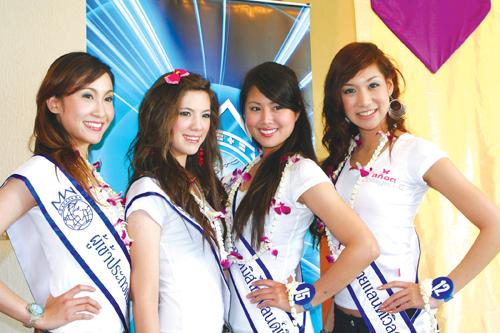 PHUKET: Phuket Pearl Group was selected to design and make the tiara for this year’s Miss Thailand World beauty pageant finalist, who will be crowned on April 9 in Bangkok.

Mr Amorn Intha-charoen, president of the Phuket Pearl Group, revealed that his company was selected to design the crown as part of a competition that was organized by Thai TV channel 3 and the BEC Tero entertainment group.

He recently told the news website Manager Online that the design will include pearls, diamonds and citrine gemstones, with an estimated value of 1 million baht.

The design is based on the concept: “beauty still has value… beauty [projected] to the sight of ASEAN”.

As a cultured pearl producer, dealer and jewelry designer, the Phuket Pearl Group prides itself on its fully integrated supply chain that applies the “farm to consumer” business model.

Elaborating more on the design concept, Mr Amorn revealed that the crown will feature a rice paddy symbol representing the nations of ASEAN.

At the top of the paddy, there will be 11 pearls representing the 10 nations of ASEAN, with the 11th pearl representing ASEAN as a whole.

The pearls will be of the “South Sea” variety, carefully selected from among a total of 2,526 pearls that completed their culturing process in 2012 (cultured pearls are produced over a period of several years).

The pearls will be selected by considering both size and quality, he added.

The pearls will be complemented by authentic Belgium diamonds weighing 1.5 karats, as well as 10 orange Citrine gemstones weighing a total of 120 karats – symbolizing 10 grains of rice for each ASEAN nation.

Mr Amorn said he believes his firm’s design was selected because of the company’s long-standing reputation for producing quality pearls, and especially for its modern and beautiful designs.

He added that aside from being selected to design the Miss Thailand World crown, his firm has also been asked to design the crown for this year’s Miss Singapore pageant – for the second year in a row.

The Miss Thailand World 2013 final will be held on Tuesday, April 9 at the Bangkok Convention Center of the Centara Grand hotel @ Central World.

Leading up to the main event, the 20 finalists are scheduled to gather at the Cape Panwa hotel in Phuket.

After that, they will do some promotional activities in Myanmar before returning to Bangkok to partake in the pageant’s “Fast Track” round, in which the finalists will contest three accolades: Miss Talent, Top Model and Beauty with a purpose – recognizing devotion towards societal change.