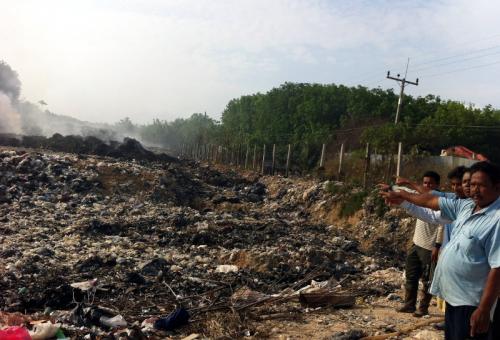 PHUKET: Villagers in Koh Lanta, east of Phuket, have appealed to the Krabi Press Club to help resolve health problems caused by the recent burning of rubbish at a landfill which they say local authorities have ignored.

“We have asked the OrBorTor Saladan [in Koh Lanta] to solve the problem, but nothing has been done,” said Phakob Solaem, a local laundry shop owner.

Smoke from burning garbage is causing respiratory problems, residents say, and the noxious smell from the dump permeates houses. Waste dropped on the road leading to the dump also creates a driving hazard.

“More than 100 households, including tourist bungalows and restaurants, are affected,” Mr Phakob explained.

The Krabi Press Club visited the two rai dump and met with some of the villagers on March 7.

“Smoke from garbage burning at the landfill affects people up to two kilometers away. Many people are sick because of it, especially children aged 3 to 5 years old,” Hod Wahab, a 52-year-old villager, said.

“I have been working in a rubber plantation near the dump for seven years. There was not this much garbage before. In the last three years, a lot of waste from hotels in Koh Lanta has been dumped here – more than 30 tons every day,” Mr Hod said.

“The incinerator cannot handle it, so the landfill was needed,” he added.