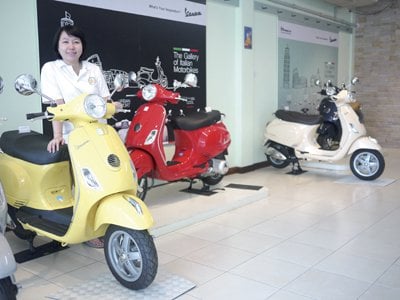 PHUKET: Drago Andaman Company, Phuket’s first and only authorized Vespa dealership, reported the sale of over 200 brand new scooters in 2011, the firm’s inaugural year of operation.

“This year our sales target is 300,” showroom Manager Supamat Thammakoranont told the Gazette.

The annual sales goal increase of 50% has already faced some bumps along the road, she admits.

“Up until the start of Quarter 2, we were selling 15 to 20 scooters per month. However, sales in the last few months has slumped by about 50%.”

Mrs Supamat attributed the decline to a number of factors.

“The recent earthquake, as well as the start of tourism’s low season, rainy season and [Thai] school term have all affected consumer decisions. With the economy slowing down, households are tightening their purse strings,” she explained.

Nonetheless, Mrs Supamat said that she expects sales to pick up by Quarter 3, revealing that the dealership is planning some promotional activities this month.

“In addition to advertising in local media, we will open a sales and promotion booth at the main shopping complexes.

“Since Vespa is less known among the younger generation, one of our key objectives is to increase brand awareness and let people know that we are here,” she said.

“We have had customers from as far as Satun and Pattani. This year new Vespa dealerships have opened in Haad Yai and Surat Thani, though we’re still the main dealer in the South,” she said.

Mrs Supamat said that the most popular colors among Phuket buyers include cream, white and black – though the showroom stocks Vespa’s full color assortment.

“These two classes are assembled at a plant in Vietnam, though all the components are made and sourced in Italy. This [bi-national production line] reduces costs for buyers by about 30%.”

The showroom also stocks 300cc models. Produced and assembled entirely in Italy, these massive scooters sell for 310,000 to 345,000 baht.

Next to the showroom is a service center, equipped for routine maintenance, repairs, customizations and modifications of all newer models – though not for older ones.

“The main difference between new and old Vespas is the transmission. The new automatics are easier to drive and maintain when compared to older manual models. Also, it is difficult, if not impossible, to source authentic spare parts for older models.”

While engine technology of newer models have adapted with the times, the original selling point of Vespa scooters remains intact.

Asked about how Vespa positions itself against Japanese scooters, which cost half as much if not even less, Mrs Supamat clarified: “Vespa is a premium brand for people who care about quality and durability. People who buy Vespa are unique and want to be seen as different from other people,” she said.

She added that the scooters are equipped with advanced anti-theft systems; its ignition key switch comprises a microchip that prevents duplicates from working.

With up to 80% of the scooters’ assembly done by hand, the bikes are particularly reliable for the hilly terrain of Phuket.

Beyond sales and servicing, Mrs Supamat went on to talk about another integral strategy of the company: customer relations.

“We have created a small community among our clients – a sort of club if you will – for which we organize road trips. So far, we have gone to Pa Khlok, Phang Nga, Krabi and Khao Lak.

“At least 10 riders join each trip. While these trips are mostly for recreation, we also incorporate other activities such as charity fund-raising. Our next trip will be to Surat Thani in September,” she concludes.

For inquiries, contact Miss Supamat of Drago Andaman on 076-522-340, or visit dragoandaman.com.

Myanmar to lure Mice to Phuket