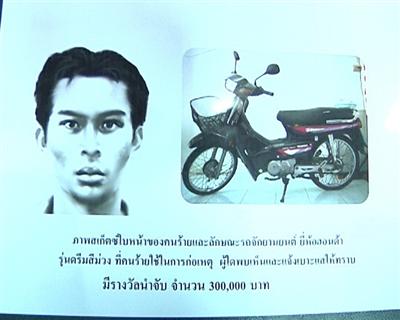 PHUKET: As the manhunt continues in Phuket for the killers of Australian tourist Michelle Smith, police have released a composite sketch of the prime suspect in the hope that some member of the public can identify him.

Phuket Provincial Police Commander Maj Gen Chonasit Wattanavrangkul said that both men involved in the attack were probably in their late 20s and relatively tall for Thais, about 175cm to 180cm tall.

This information differs slightly from original estimates, which said the killers were in their early 20s and slightly shorter.

The composite sketch is of the man caught on CCTV stabbing the late Mrs Smith last Tuesday night. Details collected about his accomplice were as yet insufficient to apply for a second warrant, Maj Gen Chonasit said.

Included with the sketch was an image of the purple Honda Dream motorbike they used to carry out the attack, just 100 meters from the Katathani resort, where Mrs Smith was staying with a group of other travel agents on a “familiarization tour” of the island.

Initial reports specified the color of the motorbike as blue. Police said earlier that there were about 30 motorbikes matching the general description in the Land Transport Department database.

Although Phuket Police sometimes restrict access to the media of composite sketches, the opposite is true in this case. Maj Gen Chonasit has ordered patrol and traffic police units and civil defense volunteers to distribute the images as widely as possible in communities across the island in the hope that the public will help identify him.

Anyone who can, will be eligible to collect a 300,000-baht reward offered jointly by police and the Katathani resort.

Phuket Police have also arranged for local cable television operators to broadcast the image every 30 minutes.

It was not mentioned if KPP Cable TV, whose owner Atsadakorn “Pod” Seedokbuab has been charged with attempted murder in the contract killing of Phuket newsman Wisut “Ae Inside” Tangwitthayaporn, was among the cable companies taking part.

Maj Gen Chonasit urged anyone with information about either man to call him directly at 081-8419559 or call the police emergency hotline number: 191.