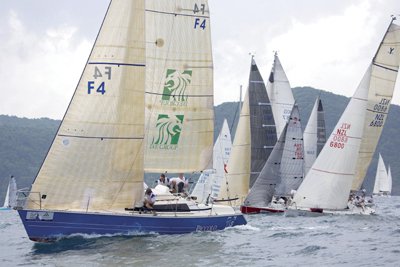 PHUKET: The yachting sector is showing signs of recovery following a three-year-period of stunted growth and sluggish sales brought on by global economic turmoil, a local industry expert has observed.

“Despite what some figures indicate (see ‘Customs: more pleasure floating in’ below), it seems to me that our strongest years in terms of sales were from 2006 to 2008,” says Tony Nixey, owner and Managing Director of Go Boating Thailand Co Ltd.

During this period the marine market was developing strongly in Thailand as boaters were keen to take advantage of the reduction in import duties to 0%, a policy implemented early in 2004.

“The strong global economy during those years resulted in many pleasure boat sales in Thailand. We did not have to try hard to sell during that time as buyers simply walked in the office with cash and asked ‘how much?'” he recalled.

“2009 saw the start of the world wide economy down-turn and sales of smaller boats was the first [segment] to be effected.

“The average guy who previously could afford [boats worth] US$ 150,000 [approximately 4.7 million baht by today’s exchange rates] simply disappeared over night.

“The risks became greater and people were just not ready to spend as much on luxury items… and with political problems leading to the closure of the airport in December 2008, people simply put off investing here,” he explained.

Tony observed that from 2009 there was an influx of cheaper craft to Phuket from the USA where private owners and dealers were slashing their prices to clear stock.

“This not only helped kill off the new boat dealerships, but also affected the local resale value of boats on the used markets,” he said.

Tony went on to note that 2011 saw a rise in investment from the high-end segment in larger Superyachts, with the trend still upwards.

“The average length and value of a superyacht is increasing year on year. The top end is very buoyant right up to the current date. Gulfcraft for example now have 7 Superyachts, ranging from 105 to 135 feet, under construction and most of these were ordered in 2011 and 2012.”

The mid-range sector, referring to boats from 50 to 80 feet long is also beginning to recover.

However, such recovery is not all due to the strength of buyers, but mainly to deals that the manufacturers have offered in their drive to keep stock and production moving, he notes.

“Buyers today are whole different bunch from those in 2005 through 2009. Nowadays the first thing a buyer asks when coming into the office is: ‘How much discount will you offer?'”

The small boat market, referring to vessels under 40ft, is also showing signs of recovery in 2012, Tony says.

“The industry cannot survive with only the top-end selling. It needs the bottom-end to be moving to bring new buyers and ‘new blood’ into the industry, whom later may become buyers of larger yachts and properties in Thailand.

“The trend is still upwards, and I’m seeing the small boats come back on line. Thankfully the current markets are getting stronger for new boat sales.

“We are still not out of the woods yet, though, as many manufacturers are still finding things tough. And with the Euro [financial and economic] issues, some European boats could simply disappear, as they have done Stateside, or be bought up by overseas investors such as [those from] China.

“The marine markets and industry have been through a tough time and we are all looking for a rosier future,” he concluded.

According to Value Added Tax (VAT) receipts reported through May 31, Phuket Customs have so far collected 23.2 million baht from the import of 39 SLVs in the current fiscal year.

The 2012 Thai Government fiscal calendar began on October 1, 2011 and will finish on September 30, later this year.

Worth an estimated 420.4 million baht, the SLVs imported have a combined weight of 1,299 metric tons, with the average weight and value per vessel equating to 33.3 tons and 10.7mn baht, respectively.

With four months still remaining in the fiscal year, the current annual rate of increase in the number of transactions (+25.8%), mean-weight (+44.7%) and mean-value (+2.8%) of the pleasure boats reflects the increasing importance of boating to Phuket’s economy.

Indeed, this year’s SLV imports, their combined weight and estimated value have already surmounted respective figures from each of the previous four years.