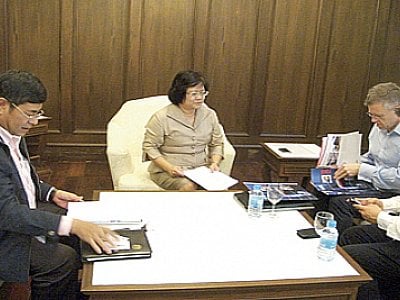 PHUKET: A Thai-Australian consortium was the latest multi-national delegation to express interest in constructing the Phuket mass-transit, light-rail project which Cabinet gave provisional approval for at the mobile Cabinet meeting in Phuket in March.

Mr Sirichai said “UGL is interested in the mass-transit project, therefore we are here for discussions to get more information concerning the project.”

“I was informed by V/Gov Sommai that the project is under the responsibility of the Ministry of Transport. We have yet to decide what our investment will be,” he said.

Mr Heaton added: “A railway from the airport to Phuket Town is both possible and suitable for the island. I think tourists like this kind of transportation. However, perhaps an elevated train is the better option in Phuket Town since roads there [along the route] cannot be expanded.”

According to UGL’s website, the 2,800-staff firm is “Australia’s largest and most experienced provider of rolling stock and infrastructure solutions to the passenger, freight and rail systems sectors. . .”

Travelmob makes a move
Global travelers are not short on options when it comes to trying to find accommodation online. The internet is awash with online booking companies and the idea has been around for a long time, so it would take something a bit different to grab the attention of people who have long been using the services of Agoda, Asiarooms and the like.

Standing out from the usual, travelmob is a bit different. It’s an online social stay marketplace that allows the guest to review the host and, in a nice twist, the host to review the guest. The site is social network friendly as it integrates with Facebook, Twitter and Pinterest, allowing users to share their travelmob experiences.

The company was founded in 2011 by Turochas “T” Faud and Prashant Kirtane with the aim of setting up travelers seeking non-traditional accommodation options with hosts who have a unique property to offer.

Travelmob tries to help its users live like a local in a foreign land, and as the company grows, more unique features will be introduced, according to Mr Kirtane, Chief Technical Officer.

“This is just the start. We intend to continuously gather feedback from our community and will introduce more localized features in the near future,” he said.

So, what makes travelmob different from other accommodation booking sites? For one, it doesn’t list hotels or motels, but focuses on villas, boats and apartments.

Its private messaging platform allows guests and hosts to contact each other right up until the booking is made, though no private contact details are exchanged prior to the booking.

Travelmob officially launched in Thailand on July 17. The company is primarily focusing its efforts in Asia Pacific and, along with English, languages include Thai, Bahasa Malay, Indonesian, Vietnamese and traditional and simplified Chinese.

The company also plans to introduce Russian in the near future. To celebrate the launch of its site in Thailand, travelmob is giving a $50 credit to all its users who make bookings before August 9.

For more information, visit travelmob.com or their Facebook page.