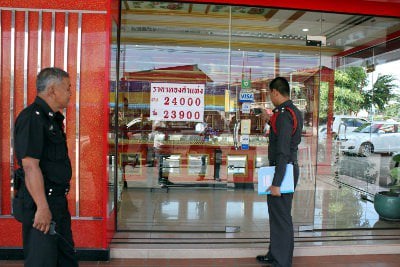 PHUKET: A group of eight students attacked two others in front of a gold shop in the heart of Phuket Town yesterday morning.

The attack, at about 10:15am, was launched in front of a hardware and electronics store on Ong Sim Pai Road in front of Kaset Market. The two students who were set upon ran to the Sri Thong 11 gold shop in hope of finding safety.

“A group of students ran up to the front of our shop asking us for help, but we locked the door,” the gold shop owner said.

“We didn’t allow them in. However, they tried to force the door open, causing it to crack,” he explained.

“Once they realized that they couldn’t get in, they ran towards Wat Saensuk; they were caught and attacked again in front of the temple,” he said.

After the fight both parties ran off, the shop owner said.

“One side of the door was cracked while the students were trying to enter. We recorded the case in the police daily report,” said Sub Lt Aekkachai.

Police are checking the CCTV in hope of identifying members of both parties.