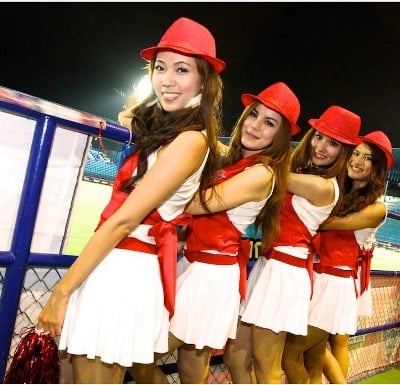 PHUKET: Soccer fans who missed out on seeing Phuket FC’s new line-up which was successful against Songkhla on Wednesday will have their next chance tomorrow evening when the Islanders are set to host PTT Rayong FC.

Kick off for the league match, to be played at Surakul Stadium, will be at 6:30pm.

Aside from seeing some of Phuket’s new signings in action, supporters are expected to come in large numbers to cheer on their boys in the rematch against Rayong’s “Fire Power”, who scorched Phuket 6-0 at PTT Stadium in Rayong on July 14.

Victory for Phuket will be no easy task, as the Fire Power are indeed in high-combustion mode, coming off a three-game winning streak in which they have banged in16 goals while conceding only one.

A win tomorrow for 6th placed Rayong could move the team up into the three-team promotion zone, depending on the outcome of other matches. (See below.)

The Phuket Gazette, caught up with the Islander’s star Brazillian keeper, Alonso Goleiro (da Silva), to confirm his intention to stay in Phuket.

Goleiro surprised fans last Wednesday when he was fielded as one of the starting 11 following his surprise announcement several days earlier that he would transfer to struggling premiere league side Samut Songkhram FC.

Asked why he decided to stay with Phuket in the end, Alonso confirmed that it was his own decision.

“Samut Songkhram was offering me a [monthly] salary of about 300,000 baht – three times what I am getting with Phuket. However, after my game last Sunday, the fan club made me realize that my heart is now green, so I decided to stay.”

“My contract with Phuket finishes on December 31, but I’d like to stay here long-term and currently am engaged in discussions to negotiate a three-year contract.”

Regarding tomorrow’s match against PTT Rayong, Alonso said, “I’m not sure if I will play or not. I want to, but I think the coach plans to fill the foreign quota [of three non-Asians] using Santos, Pato and Nenebi.”

Other Division One fixtures this weekend: