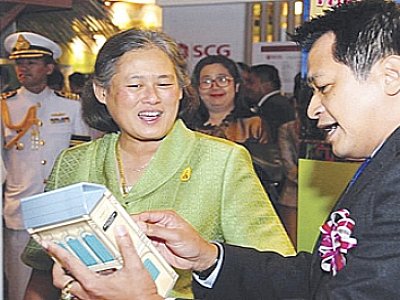 PHUKET: The island’s most recognized local food-gift company Pornthip (Phuket) Co Ltd, was recently honored with the “Good Design Award” in Japan for the packaging of its Sino-Portuguese snack gift items.

This was the second year in a row the company received the accolade for its unique and innovative packaging design.

Also recognized with the “G Mark”, the annual award has been running for more than 54 years, with recipients selected from thousands of submissions, from companies in Japan and other countries around the world.

“Not only is it [the award] about design competition, but it’s also about developing and promoting the design of a diverse array of products [that will] improve the quality of life [for consumers] and promote the development of related industries,” he said.

Mr Wirawat said that he is proud for Phuket and Thailand that his product is the recipient of such an accolade, noting that this year’s awards had more than 10,000 submissions from over 70 countries all around the world, largely from Japan and Europe.

“Receiving this award is [a way of] stimulating [inspiring] operators to utilize local culture and traditions to increase their business [volume and offerings].

“We [Pornthip] have maintained clear goals of utilizing [Phuket] heritage to increase business continuously… especially [monetizing] that [heritage] of old Phuket Town, since the Phuket city municipality have implemented a project to push for it [old Phuket Town] to get World Heritage [recognition].

Moreover, Phuket province and the Andaman [coastal region] has many beautiful cultures and traditions that [can help you] increase business.

The packages won for standing out as unique, boxed packages that are designed to resemble Phuket Sino-Portuguese architecture style, historical buildings; a medium for relaying Phuket’s heritage, promoting tourism to the island province and for representing an environmentally friendly snack packaging method.

All in, the company has a total of 48 designs of different buildings, and after the New Year, plans to launch designs of Phuket’s provincial hall, as well as a savings bank package concept featuring seven different designs, currently in the works.

The packages are collectible; Some popular models include the Clock Tower, On On Hotel – the first hotel of Phuket, and typical buildings on Soi Romanee and Ranong road, the Mor Lao building and Thai Hua museum.

The snacks, many of which are becoming harder to find, have particularly been popular among Asian tourists – Chinese, Korean, Malaysian and Japanese.

Launched for Phuket’s tourism markets in November 2010, the Sino-Portuguese package design was also the recipient of three other awards over the last two years. These include the AsiaStar 2011 – the ‘Packaging Oscars of Asia – and the Prime Ministers’ Export Award.