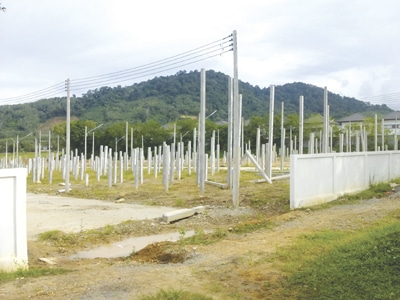 PHUKET: With the nationwide minimum wage set to rise to 300 baht, a labor shortage tops the list of business risks for property and construction firms in 2013. To consumers, this could mean longer construction periods while they wait to take possession of their new homes.

Thailand’s construction, infrastructure and manufacturing sectors are now facing a shortfall of about 200,000 workers. The situation is expected to worsen next year when a number of government infrastructure projects are set to launch, which will lead to skyrocketing demand for workers.

To ease the situation, Housing Business Association president Issara Boonyoung said his organization has asked the Labor Ministry to relax rules on employment of foreign labor.

Foreigners’ entry to the Thai labor market should be facilitated, and they should be allowed to relocate once they are here.

“As we have many construction sites, workers should be allowed to move around,” he said.

According to the National Economic and Social Development Board, there are about two million foreign workers in Thailand, mostly from Myanmar, Laos and Cambodia.

After enduring the labor shortage for some time, some property companies have resorted to technology.

Pruksa Real Estate and Sansiri PCL, for example, have moved towards prefabrication. Others have modified the construction process so that fewer skilled workers are needed.

The labor situation is aggravated by the continued expansion of the property sector as it enjoys a 10% annual increase in housing demand. Each year, about 230,000 residential units are launched, 80,000 of which are in Bangkok alone.

“This problem will worsen in 2013 when the government’s infrastructure projects worth at least 500 billion baht start.

“This will attract labor away from private projects to public projects, as some are in the workers’ provinces or nearby. This will affect both the real-estate and construction industries,” Issara said.

The government is scheduled to announce the bidding results for its 350bn baht worth of water-management projects early in the new year and construction should start shortly after that.

Meanwhile, a portion of the 2.2 trillion baht worth of infrastructure projects planned for the period between 2013 and 2020 will be put to tender next year.

With a low unemployment rate of 0.6%, or only 232,400 eligible laborers without work, Thailand is among the few countries with an unemployment rate below 1%, compared with nearly 30% in Spain and Greece and nearly 8% in the United States.

A low fertility rate coupled with growing labor demand in the agricultural sector has exacerbated the situation, as the workforce has not increased much.

In the third quarter of this year, agricultural-sector employment rose 3% from the same period last year as farmers expanded rice-plantation areas.