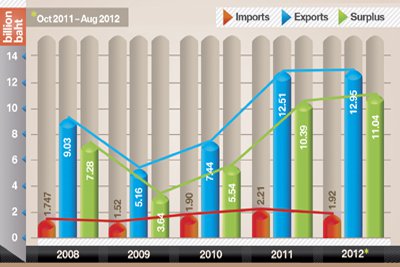 According to Phuket Customs’ receipts for the 2012 fiscal year (October 2011 to September 2012), accounting through to the end of August, 2012, the value of exports from Phuket peaked at 12.9 bn baht, with imports valued at 1.9bn baht.

With still one more month left to be accounted for before the fiscal year’s books are closed, the full-year surplus figure could increase depending on the value of exports and imports tallied this month.

Regardless, the figure for exports marks a new annual record with the combined value of exports over the 11-month period already outstripping last year’s full year figure (12.5bn baht) by 3.5%.

Meanwhile, the combined value of imports so far this year is still about 200 million baht shy of matching last year’s full year figure of 2.1bn baht.

Raw rubber continues to dominate Phuket’s exports, so far this year valued at 9.19bn baht, or 71% of all exports.

All other exports were relatively insignificant with a value of only 62.2mn baht or 0.48% of exports.

Topping the island’s imports so far this year has been chilled sea fish, worth 582.2mn baht baht or 30.4% of all imports.

All other imports – wine, food, construction materials and car parts, among others, tallied up to 32.1mn baht (1.68%).

Phuket Business: Let’s go back and review the basics