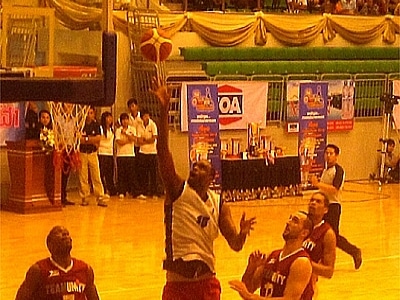 Held between September 14-22, the TOA Thailand Open 2012 Phuket Championship featured six teams – two from Thailand and a team each from USA, Australia, Indonesia and Brunei – who played a total of 17 exciting matches at Phuket Town’s brand new 4,000-seat gymnasium.

Despite only playing with one substitute throughout the event, a fit Unity squad won the gold following a 98-83 win over Thailand’s Rising Stars squad in what was largely a one-sided match.

Earlier this week, the Rising Stars – an all-star squad comprising several non-Thai athletes including two African Americans and a Filipino – had delivered Team Unity their only defeat in the tourney, edging the Americans by a single free throw, 80-79.

The rematch, however, saw the Americans, who had dominated every other team, embrace the sweetness of revenge, extending a lead by more than 20 points by the end of the third period of the final.

In the final five minute stretch, the Rising Stars put up a commendable comeback, with strong play inside the paint by Americans Justin Howard and Michael Earl, who helped to bring the margin down to 9 points.

But it would be the all-American side to prevail at the final buzzer claiming the grand prize of 500,000 baht, leaving the Rising Stars to settle with the silver medal and 250,000 baht.

The top scorer was Unity’s Chauncey Leslie with 29 points, while the Rising Star’s American center, Howard led Thailand with 26 points.

As for the two finalist’s top three-point shooters were Unity’s Wayne Howard who swooshed down five, while the Rising Star’s Michael Earl led his side with two.

Earlier in the day, Thailand’s Provincial Electricity Authority (PEA) won the bronze medal after their 93-76 win over Indonesia’s CLS Knights.

Watching the finals from the stands were Brunei’s Cold Storage squad and Australia’s Gators side who had a less-than-satisfactory performance in the tournament.