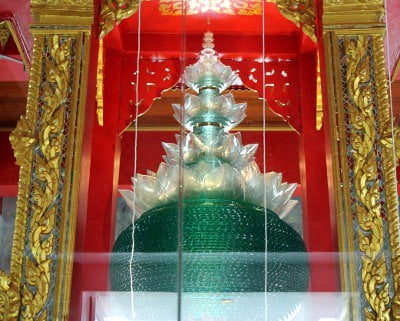 The ceremony was led by Phra Thepsitthimunee, Deputy Monk Dean of Region 16 from Dusidaram Warrawiharn Temple in Bangkok, along with 108 Buddhist monks from the greater Phuket area.

“The relic of the Lord Buddha was given to Wat Nakaram by Sangharaja [the head of the order of Buddhist monks in Thailand] to be installed in Chedi Dok Bua Kaew,” said the Director of the Phuket branch of the National Office of Buddhism, Chatpawit Jinapong.

“It is intended to remind Buddhists in Phuket of the virtues of the Lord Buddha, as well as to build their faith in Buddhism,” he added.

Mr Chatpawit explained that the installation of the relic would benefit Buddhism, as well as tourism for Phuket.

“Seventy-three per cent of the people on Phuket are Buddhist, and the island is well-known as place of culture as well as for its natural beauty,” he said.

There are 37 Buddhist temples in Phuket, 31 of which are of the Maha Nikaya order and the remaining six of the Dhammayuttika Nikaya order. There are also 11 Buddhist monk camps on the island that have yet to be formally recognized as temples.