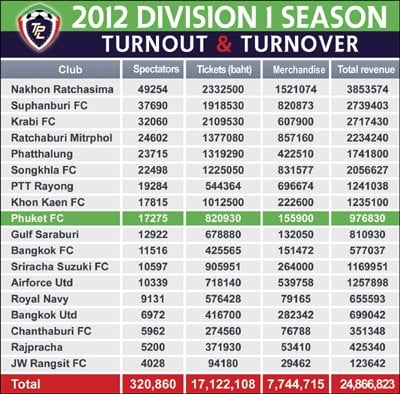 PHUKET: Business was steady for Phuket FC during the first half of the 2012 season, with the club’s accounts revealing nearly a million baht in revenue.

This sum took into account revenue from ticketing and merchandising; 84% or 820,930 baht alone came from ticket sales, tallied from a total of 17,275 tickets sold.

Overall, in the league tally for the highest number of spectators and ticket revenue, Phuket finished mid-table,at 9th place.

The team’s remaining revenue of 155,900 baht (16%) came from merchandising – the sale of team paraphernalia including polos, t-shirts, jerseys, scarfs, key chains and bumper stickers – finishing a lowly 12th in the league.

Although there were a total of 17 fixtures in the season’s first half, the figures only account for revenue generated at the club’s nine home matches, played at Phuket’s Surakul Stadium.

The statistics do not account for other sources of revenue such as advertising nor food and drink sales, and revenue generated at away matches.

Moreover, they do not take into account salaries, facility rental, travel, training and other operational related expenses accrued during the period.

The largest league turnout for a single match so far this season was on July 18, when Nakhon Ratchasima hosted Saraburi to a 1-1 draw at Korat’s 25,000-seat Chalerm Phrakiet 80 Pansa Stadium.

The Nakhon Ratchasima “Swat Cats” topped the league in ticketing and merchandising, generating some 3.8mn baht from 1.5mn baht sales in merchandise and 2.3mn baht in tickets for nearly 50,000 spectators.

Since the figures were released, Phuket FC has played one more home game, against PTT Rayong on July 28, which had a turn out of 2,200 spectators.