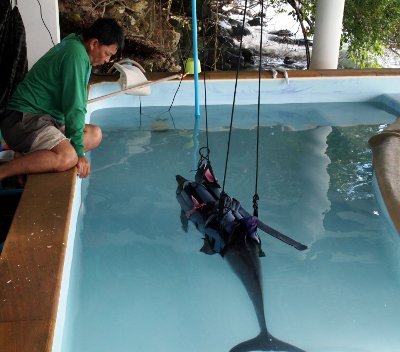 PHUKET: Veterinarians at the Phuket Marine Biological Center (PMBC) say that a striped dolphin that washed ashore in Phang Nga last week is in a stable condition at their facility, but fear for its long-term survival prospects due to its inability to feed on its own.

Dr Kongkiat Kittiwattanawong told the Gazette this morning that the dolphin, which washed ashore at Tai Muang District on July 30, was transported to the PMBC Endangered Species Unit the following day.

Antibiotics administered to treats wounds to the animal’s rear flippers and tail have worked well, but the cetacean continues to suffer from dangerously high levels of urea in her muscle tissue, making it impossible for her to swim on her own.

For this reason the dolphin needs round-the-clock treatment and has been fitted to a sling to prevent her from drowning.

While describing the animal’s condition as stable, Dr Kongkiet said it had yet to feed on fish and squid offered to it and hence needed to be force-fed through a tube. The dolphin is also suffering from considerable stress due to captivity.

The researchers hope the dolphin will soon begin to feed on its own, as this would be a big step towards recovery. Otherwise it risks starvation as force-feeding is insufficient to meet its energy requirements, he said.