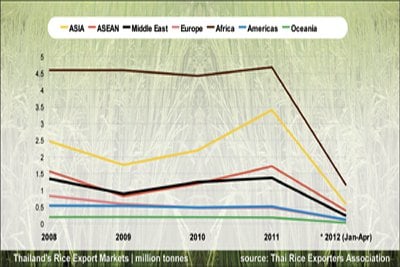 PHUKET: A Thai trade researcher has concurred with a recent prediction by the United States Department of Agriculture (USDA) that India and Vietnam will export more rice than Thailand this year.

Thanawan Phonwichai, the Director of the Business and Economics Forecasting Center at the Thai Chamber of Commerce University said that Thailand is expected to lose its crown as the world’s top rice exporter due to an increasingly competitive regional market.

“Consistent with the USDA’s prediction, India this year is producing a lot of rice at lower prices. This has caused Vietnam to lower its prices to be more competitive.

“At the same time Thailand has not lowered its prices due to its base costs being a lot higher. As a result, we expect that India will export 8 million tonnes this year, followed by Vietnam exporting about 7, and Thailand just 6.5 million tonnes,” he said.

According to the USDA, the predicted figure will equate to a 39% annual decline in the Kingdom’s rice exports.

Mr Thanawan added that he expects Thailand to reclaim its top position in 2013, however, when his department predicts that Thailand will export 8mn tonnes, followed by Vietnam with 7mn tonnes and India at 6mn tonnes.

In a related article by The Nation, it was reported that Thailand only exported 4.7mn tonnes between October, last year and July, 2012, about half when compared to the same period a previous year, when nearly 9mn tonnes were exported.

Export value also declined from 160 billion baht in the previous year to about 100bn baht this year, according to the Thailand Development Research Institute (TDRI).

The TDRI attributed the fall mainly to the government’s rice-mortgage policy.

The rice-pledging policy had destroyed the competitiveness of Thai rice in the world market because the government’s mortgage prices were a lot higher, TDRI President Nipon Poapongsakorn said.

Mr Nipon pointed out that Thailand would suffer a loss of 87bn to 100bn baht immediately if the government decided to release 10.2 million tonnes of rice in its stocks, noting that the pledging price is high while the current market price is still low.

“Thailand is losing huge amounts on subsidies that are helping, not just poor farmers but also landlords and rich farmers, because the government is accepting all the rice that is entered in the pledging scheme.

“More than 52% of the rice entered in the pledging scheme comes from rich farmers,” Nipon explained.

He added that if the government changed its pledging measure to providing direct subsidies to a particular group of small farmers, then it would only spend about 30bn to 40bn baht a year.

According to TDRI, about 80% of Thai farmers are small, producing only about 10 tonnes of rice per harvest.