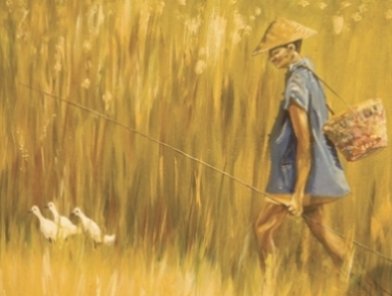 PHUKET: Robin Gillow’s paintings, now on display at Boathouse, remind the viewer of a disappearing style of country life found in Thailand.

This talented South African began showing her drawings and paintings while still in school. She learned her craft while attending what’s now known as the National School of the Arts, in a program that included industrial design, sculpture, painting and technical drawing.

She later trained at the Johannesburg College of Art. After graduation, she was hired as the art director at one of South Africa’s largest publishing houses. She became well known for drawing race horses, which earned her many commissions.

In 1983, she moved to Australia with her husband Kevin. She continued to work in art and design as an art director for a variety of publishers and advertising agencies, but by the end of the decade, she and Kevin took to a life on the sea – beginning years of travel crossing the Indian Ocean.

While exploring Madagascar, the eastern coast of Kenya and the remote island chain known as Chagos, Robin continued her freelance artwork, taking commissions to paint horses, dogs and children.

“We were living on a boat so I had to work in small form. I also developed many of my ideas for a painting from memories of places we visited or even from dreams. I’m a very visual person and the sense of color and place stays in my mind, which I can recreate much later in paintings.”

Robin’s current show at Boathouse is named Contemplation. It’s a charming and captivating look at the traditional lifestyles of rural people.

It also demonstrates her talents at drawing and painting of birds, fish and farm animals, including water buffaloes. Rather than a photographic rendition, Robin uses an impressionistic touch with her brush.

“I’m fortunate to be able to sell most of my work and have very little stock. Perhaps that is the result of living on a boat for so many years where there was limited storage. So I focus on the present work.”

From her large, light-filled studio in Rawai, Robin explores her art by often taking a completed painting and cutting it into pieces and then making a collage with other canvas to expand and open what she wants to say.

Her reasoning behind this is to “make a statement regarding ‘life’, ‘the planet’ and how, we, as mankind view it – through fractured glasses blindly believing that what we do to our world is progressive.

“Cutting the work up in this fashion adds movement, depth and a certain mystery to the work. Also by recycling my finished work to create a ‘second’ painting, about a particular subject, I am admitting to my own blind guilt; I take an object that is perfectly good as it is and alter it – perhaps into something more agreeable on the eye, perhaps not, it depends on what I want to say.”

Robin is currently preparing to join an international charity exhibition in London that supports a strong environmental cause. Her current work at Boathouse can be viewed and purchased until early January, 2013.

Phuket Diving: Building the reefs of the future