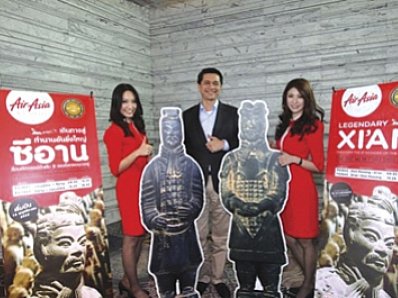 PHUKET: As part of its latest strategic marketing shift, Low Cost Carrier (LCC) AirAsia recently canceled its Phuket flights to Ubon Ratchathani and Bali, topped off with the cancellation last week of its Thailand-Sri Lanka route.

Meanwhile, the leading LCC has reinstated its Phuket-Udon Thani route, while revealing additional plans to shift and expand regional focus to the high-volume, high-growth, Chinese market.

AirAsia announced on its Thai Facebook page: “Due to the 34% increase in Chinese passengers over last year to Chongqing and Wuhan, we have decided to ‘move forward’ and open a new route [from BKK] to Xi’an.”

The new route, which will connect more of Thailand’s low-fare passengers directly with the city of the famous “Terracotta Warriors”, is set to launch by the middle of next month.

Meanwhile, AirAsia’s final flight from Phuket to Ubon Ratchathani was on September 29, with Bali’s terminal flight on September 30. The company will cease its Bangkok to Colombo, Sri Lanka services as of today.

Daily service from Phuket to Udon Thani, which had previously been suspended, was reinstated last Monday, with flights departing Phuket at 3:45pm.

The strategic changes came as the LCC moved its Thailand base in Bangkok from Suvarnabhumi Airport back to Don Mueang Airport on October 1.

The Bangkok-Xi’an flights will launch with promotional one-way prices from 2,790 baht, with more destinations to be covered, said Tassapon Bijleveld, CEO of Thai AirAsia.

Quoted in a report by The Nation, Tassapon said: “China is growing rapidly and AirAsia is very focused on this market. We are the first and only LCC to offer daily direct flights to Xi’an, one of China’s most popular tourist destinations, located in the central area of northwest China.

“Once again, we are very proud to be opening up more opportunities for investment and tourism revenue in cities with great potential and Xi’an is no exception.”

At 600,000, Chinese travelers now make up the largest group of international passengers of Thai AirAsia, accounting for 11% of total passengers from January-
September. This is a significant increase of 34% compared to the same period last year.

“Our direction for the remainder of 2012 and 2013 is to focus on further expansion in China and to add additional frequency to our popular domestic and international destinations. We are confident that as a result of this, we will hit our target of 8 million passengers this year and eventually 10 million passengers by 2013”, said the CEO.

Known as the 8th Wonder of the World, Xi’an is also one of China’s four historical capital cities, famous for The Terracotta Warriors of Emperor Qin Shi Huang, a collection of over 7,000 life-sized depictions of cavalry, war horses and chariots buried in a 25,000 square meter section of the monarch’s mausoleum.