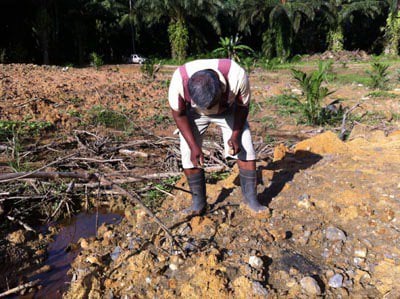 PHUKET: The owner of a plot of land in Krabi, believed to be the site of a massive shell fossil discovery, has asked for people to return the fossils stolen from his land and not to steal any more of them .

Chob Pankaew, 55, announced news of the discovery of a huge collection of fossil shells on his farm at Nong Phak Bung village in Klong Thom district, Krabi, earlier this month.

The fossil find was uncovered while farmhands were using a backhoe to clear his 10 rai of land ahead of sowing seeds to grow palm trees.

However, since revealing the discovery, many people have snuck onto his land to steal the possibly valuable remains, said Mr Chob.

“I put all the fossils we found into one big pile, but the last time I checked many pieces had been stolen,” he said.

He added that he also found a pair of flip-flops beside one large rock encrusted with many fossil shells. The fossil shells have now disappeared.

“I think people are sneaking in at night to steal the fossils,” Mr Chob explained.

“I believe that those who have taken fossils from my land are good-natured people. They may want to just study them or keep them for good luck since they are so rare to find.

“My only concern is that there might be some guardian spirit looking over these objects. Some villagers who asked first and were given permission to take some fossils told me that they had bad dreams. Most of them returned the fossils back to where they found them,” he added.

“So I would like to ask all the people who have taken fossils to return them, and to please not remove any more fossils from my land,” he urged.

Mr Chob explained that experts from the Surat Thani Mineral Resources office came to take samples of the fossils in order to study them.

“They told me that the fossils look similar to others that were discovered a few years ago at a lignite mine near a power plant in Klong Nua district of Krabi.

“They are now checking to see what type of shells, and how old, they are,” said Mr Chob.

US Navy in Phuket to splash out B2mn a day