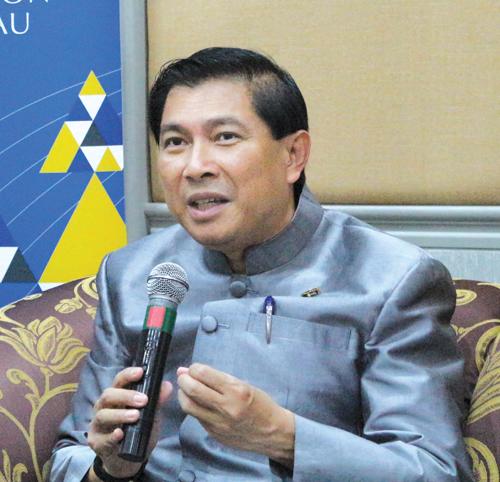 PHUKET: The Thailand Convention and Exhibition Bureau (TCEB) has revived its efforts and moved its attention once again to help promote Phuket as a regional hub for corporate and organizational tourism.

A new four-year destination promotion strategy was presented to local, regional and national officials at a seminar on April 26 at the Metropole Hotel in Phuket Town.

Heading the seminar were several representatives from the TCEB, as well as Phuket Governor Maitri Inthusut and Phuket Democrat MP Anchalee Vanich-Thepabutr.

The seminar was briefed on a four-year plan to develop Phuket and the neighboring Andaman seaboard provinces as “Amazing Andaman, World-class tourist destination”.

At the meeting, Governor Maitri revealed that Phuket will be adopting a “4Ms” strategy: MICE, Marinas, man-power and medical tourism.

“It is our intention to further develop on Phuket’s strong points. We will continue to focus on Phuket being a tourist destination and a Southern Thailand business hub linking the Andaman [seaboard] together.” Gov Maitri explained.

The event marks the first time that the island has officially been in TCEB’s promotional ‘cross-hairs’ since October, last year, when the government reversed its initial decision of approval for the decades-old International Convention and Exhibition Center (ICEC) project planned on the north of the island.

Following that decision, the island’s strategic positioning as the country’s primary MICE hub outside of Bangkok, took a back seat when the TCEB made its “Seven Wonders of the Andaman” campaign redundant.

The TCEB then shifted its attention to Chiang Mai, where a 3 billion baht ICEC was subsequently completed, and was scheduled to open early this year.

Ms Anchalee, who had championed the Mai Khao ICEC since being elected Phuket Town constituency MP in mid-2011, told the seminar that the island is still integral to the country’s MICE industry.

She explained that pushing Phuket towards becoming a MICE city is not a new idea and that there were several attempts from different governments to build an ICEC, at least up until recently when the plan was put on hold, indefinitely.

Nonetheless, the Democrat MP emphasized the value of the industry.

“MICE groups are estimated to have three to four times more purchasing power than regular tourists.

“This means that if we can attract 3 million MICE group travelers, which is [economically] equal to 9 million regular tourists, our income would still remain unchanged, while the city [island] would be less crowded.

“We might even be able to select our visitors in the future,” MP Anchalee said.

The MP added that from now on, Phuket will intensively work on developing MICE-specialized human resources in order to prepare for the ASEAN Economic Community (AEC), set to take effect in 2015.

In regards to the construction of an ICEC, or lack thereof, Ms Anchalee said that the province will have to wait for the government or the private sector to get involved, and that such a facility, if built, would be operated by specialized skilled workers, many of whom would be recruited locally.

Meanwhile, TCEB Director of Exhibitions Supawan Teerarat told the seminar that Phuket is one of the four Thailand MICE cities to be continuously promoted and developed – along with Chiang Mai, Pattaya and Bangkok.

Director Supawan said that Phuket, which she described as “an amazing island in the Andaman [seaboard] region”, is a MICE city [province] which connects the whole world.

She went on to stress the points that have made the island a successful MICE destination: “Phuket is a world-famous tourist destination with communication systems, transportation, hotels and conference halls. In 2012, Phuket’s MICE industry was worth more than 4.8 billion baht, the second highest [in the country] after Bangkok.

“Of this, 4.725 billion baht came from foreign MICE industry [source markets] and another 95 million baht from domestic MICE [tourism].”