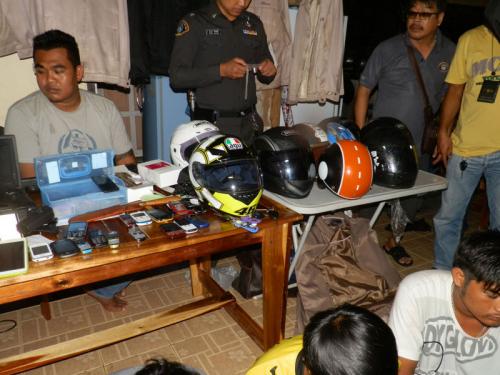 PHUKET: Crime Suppression Division officers arrested a Phuket loan shark and his six henchmen in a raid on a house in Thalang district late yesterday afternoon.

Led by Maj Roongsak Maichandee and armed with a search warrant, the officers entered a house in Ban Muang Mai, off Thepkrasattri Road, and arrested Yutthana “Tum” Dorkjan, 31, for running a loan shark operation under the name Tum Credit.

“The six men went out onto the streets and into neighborhoods to find new customers, and collect payments,” Maj Roongsak said.

“They collected 20 per cent interest per month. The maximum rate to be charged on loans is set by law at 15 per cent per month,” he explained.

“They were all charged with operating and assisting an illegal loan business and charging illegal interest rates. They have all confessed to the charges against them,” he stated.