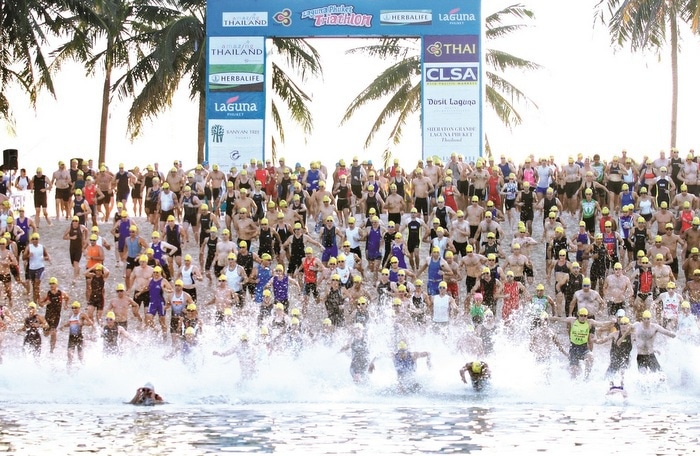 PHUKET: Rising Chinese numbers at the Challenge Laguna Phuket Tri-Fest bodes well for years ahead, as the classic Phuket event looks to generate more than 90 million baht this year.

The noticeable growth of the Chinese market coincides with Dalian Wanda, owned by Wang Jianlin, a property and entertainment industry tycoon, signing for 100 per cent of the World Triathlon Corporation (WTC).

Mr Wang said the WTC deal represented a further transition away from being “a traditional property company”, reported The Financial Times. It is the third major investment in the sports industry Mr Wang has made following Infront Sports & Media and football club Atletico Madrid.

Despite the increase in Chinese interest in the Tri-Fest, other countries in the Asia Pacific region remains the main source of participants, with the top ten countries of origin including Hong Kong, Singapore, Malaysia, Japan and Australia. From Europe, the United Kingdom provides the highest number of participants, followed by Switzerland, Germany and Spain.

To date, more than 1,300 athletes have signed up for the two main races. An estimated 1,500 athletes are expected to join the race this year.

“The enduring appeal of the Laguna Phuket Triathlon and the unique challenges of Challenge Laguna Phuket continue to draw endurance sports enthusiasts to Phuket each year,” says Ms Prapa.

“With thousands of athletes, each with three to five followers, family members, friends, partners, media, sponsors and/or supporters travelling together to Phuket from around the world and spending four to five nights during the week-long Tri-Fest, the event is projected to generate over 90 million baht in spending in the tourism segment on the island.”

Business Buzz: Test to see if social media will work for your business