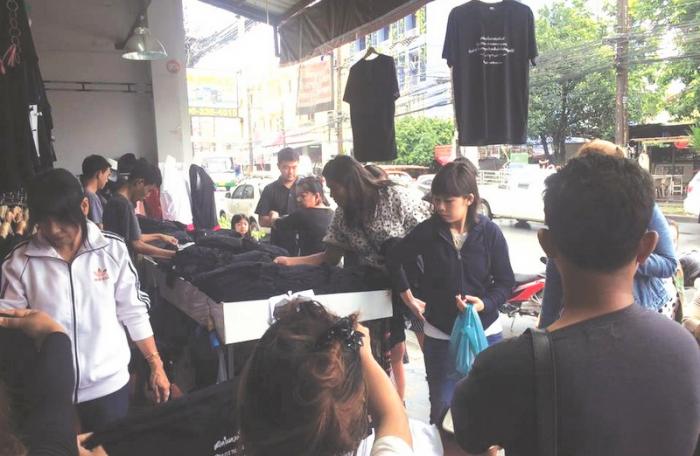 PHUKET: The government and private sectors have joined hands to ensure that the demand for black-colored clothing is taken care of in Thailand, including in Phuket.

The move came after the government announced that government officials must wear black clothing for an entire year during the official mourning period of HM King Bhumibol Adulyadej.

It is recommended, but clearly not required, that tourists and employees of private sector organizations follow suit and wear the same.

“It is difficult for us to state a specific number of black clothing items that have been sold on the island since the announcement from the Royal Palace,” said Decha Phetwong, chief of Phuket’s Office of Commercial Affairs.

“However, it’s safe to say that the quantity of black clothing in the market and the number of people buying and wearing it has increased considerably.”

Officials are keeping an eye out for vendors who try to sell the clothing items at a price higher than 250 baht.

“The Department of Internal Trade has stated that the price of black items without any logos must not exceed 250 baht. We noticed a few vendors selling for 290 baht, but they had invoices proving that the shirts were originally supplied at an inflated price – which is okay,” he added.

A number of vendors selling black clothing chimed in, saying that demand increased very rapidly and that they have had to order much more stock to keep pace with demand.

“The trend in clothing demands has changed only temporarily and I am doing my best to provide for my customers,” said Ms Fai, who has a clothes shop in Samkong.

“I have removed all other colored clothing from my shop and have been selling only black shirts,” she added.

The demand for black comes mostly from people other than those in government offices.

He also added that the government has not forced people to wear black, but a lot of tourists have purchased black clothing in order to mourn the loss of the HM the King alongside the Thai people.

“Tourists do understand local sentiments and the culture of the country,” he said. “I think the constant demand for black clothing should last for a month. We expect everyone on the island and the rest of the country to have purchased black clothing items to the point of saturation.”

Finance: Profiting from periods of panic

Finance: Listen to price rather than opinions