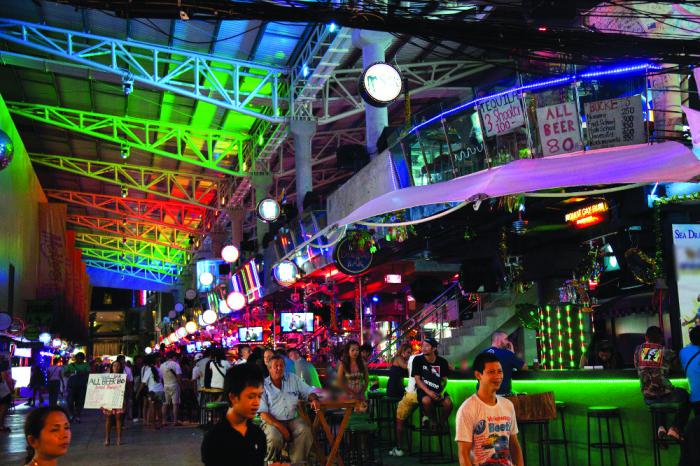 PHUKET: Despite a handful of unexpected alcohol bans due to elections brought about by the ongoing, nationwide political protests, business seems to be barreling forward as usual in Phuket’s premier party town.

The Director of the Tourism Authority of Thailand, Anoma Wongyai, told the Gazette, “I think because the alcohol bans were short-lived, only one or two days long, they did not have a great effect on most businesses. Although some businesses, like bars and discos, whose revenues depend almost entirely on alcohol sales, were affected a little bit.”

So far this year, there have been eight alcohol bans, one of which was for a standard Buddhist-holiday prohibition, and two because of the originally-planned February 2 national election, which was ultimately shut down by protesters. This shutdown ushered in five additional, unexpected alcohol bans, creating unusually adverse circumstances for some nightlife venues.

Revenue on the weekends is higher than at any other time of the week, confirmed Weerawit Kurasombut, head of the Patong Entertainment Business Association, with Friday and Saturday nights boasting up to a 50 per cent increase during high season and a 20-30 per cent increase in the low season.

“The only day that seems to be busy year-round is Saturday. This is likely because in Western countries Saturday is the night to go out, so tourists do the same here,” one Patong bar owner told the Gazette.

A bar owner on Nanai Road has felt the weekend strain, and told the Gazette, “Our revenue has decreased a bit from the unexpected closures, since they happened to be on nights when we usually have a lot of business.”

Patong Municipality reported the total income in Patong last year as being about 472 million baht, with the average tourist spending 1,000 baht on a night out, added Mr Weerawit.

“The number of tourists coming to Patong has dropped quite a lot from last year, up to 20 per cent, as a result of the political and economic problems in Thailand. Moreover, many countries have been promoting their tourism, which provides many more holiday options for travelers,” said Mr Weerawit.

However, it seems that it is not the tourists, but the regulars that can make or break a bar.

“The difference in sales on the slower nights of the week depend on whether you have regulars coming in or not. In terms of tourist customers, I would say the difference in a slow and a busy night is a good 50 per cent,” said the Patong bar owner.

“A lot of places need a really good high season in order to cover the basic costs [such as rent, salaries and alcohol] during the low season. For me, it’s a bit different. I am in a decent location and I’ve been here for awhile, so I have revolving clientele who visit regularly, as well as a good, local customer base.”

But even income from regular customers can’t always cover everything in a bar’s revenue stream, especially when tourist numbers veer off course.

“As soon as Bangkok went down, so did the numbers. The beginning of high season was okay, but since the problems have escalated, my revenue has dropped a solid 40 per cent,” said the bar owner.

“I’m hoping that since the high season was not so great because of all the trip cancellations, the low season will show some of these people coming back to Thailand at a time they normally wouldn’t, making the season better than usual. I suppose time will tell.”

When the economy is thrown a curve ball like it has been so far this year, businesses without established customer bases could be hit harder than those that have a regular clientele. But even the seasoned bar owner knows that anything can happen.

For now it seems that despite a few more slow nights than normal, it is business as usual for the party town’s bars. Some will sink, and some will swim.

How to choose an offshore broker