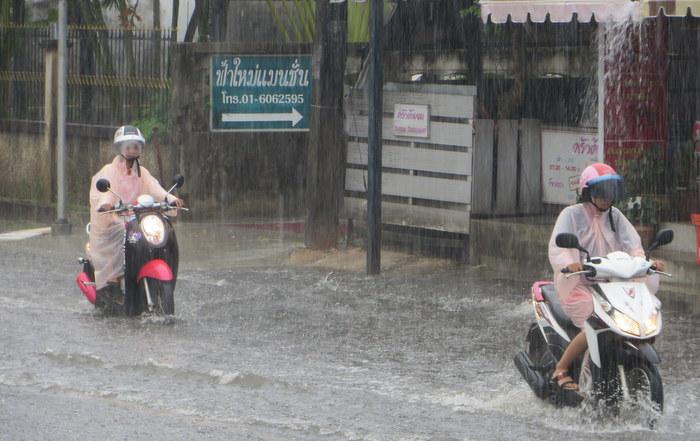 PHUKET: Phuket’s worst drought in the last 30 years appears to be at an end, after heavy showers soaked parts of the island over the weekend and more are forecast for the coming days.

“The rainy season has officially begun; these rains are part of the southwest monsoon,” Suntad Panbanpeaw, director of the Meteorological Department’s Phuket office, told the Phuket Gazette today.

Heavy rain is forecast over 90 per cent of Phuket for tomorrow and Wednesday, he added.

The driest January-to-March period in 30 years led Governor Maitri Inthusut to call a special meeting to prepare for water shortages in March.

As a result, the Phuket office of the Provincial Waterworks Authority (PWA) reduced its water output; local municipalities were ordered to submit weekly water reports; and islanders were told to be aware of increased risk of fire (story here).

The 3.3 million cubic meters of water in the Bang Wad Reservoir in March has shrunk to 1.38mn cubic meters, Prapan Deinsirirat, head of water allocation at the Royal Irrigation Department’s Phuket office told the Gazette today.

“Bang Wad is only 18.8 per cent full, and it won’t be completely re-filled until November – the end of the rainy season – but with the rain coming, the island’s water shortages should improve,” Mr Prapan said.

Though the Phuket Provincial Administration Organization (PPAO) had received numerous complaints of water problems throughout the island, sending out water trucks to dry communities as recently as Friday, it received no requests for water on Saturday or Sunday, a PPAO staffer told the Gazette today.