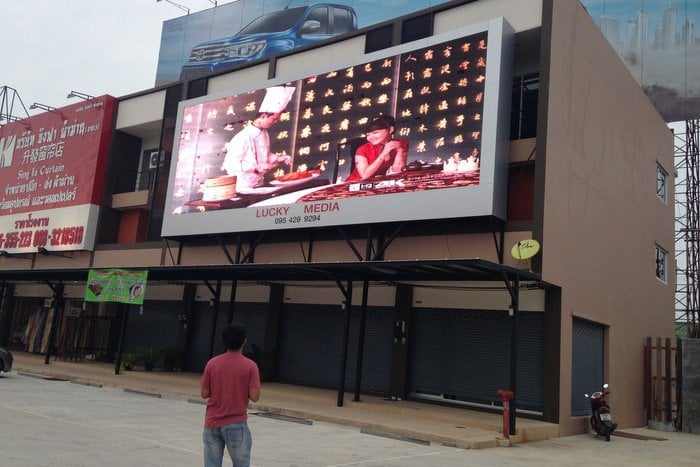 PHUKET: Lucky Media is one of those companies that from humble beginnings has evolved into a player with serious impact and an annual income of 150 million to 200mn baht.

The publicly listed company was born in Bangkok out of the Assawarungruang family business, Lucky Music – which started and continues to be a music store importing PRS amplifiers, Gibson guitars and other musical instruments. What Lucky Media is bringing to the island, however, isn’t for your ears, it’s for your eyes – large, crisp and crystal-clear LED billboards.

Through family connections and friendships with local people on the island, Lucky Media has managed to wrangle some of the prime, high-volume advertising locations in Phuket: Laguna, Tah Chat Chai checkpoint, Ban Chalong School, Chalong Circle, the junction of Thepkrassatri Road and the bypass road, and now the densely trafficked Heroines’ Monument.

“Our company is a technology company specializing in sound systems and top-quality lighting equipment,” Preccha Assawarungruang, managing director of Lucky Music, told the Gazette. “We work together with the National Theatre, setting up the sound systems for them, as well as the lighting and projectors.”

About eight years ago, Mr Preecha launched Lucky Media into the LED screen business after realizing that the screen production quality in China had finally caught up with the Japanese and the Americans.

“We found the quality from China was quite good. Within the last 10 years, the Chinese have been producing LED screens and the quality is better and better every day,” Mr Preecha said.

Lucky Music then linked up with Lampu Company in central China. Now the company is pushing into the Phuket market with six crisp LED screens and four more in the works.

“Most of the LED companies are just concerned about Bangkok; they forget everything outside of Bangkok,” Mr Preecha says.

“The main population of course is in Bangkok, but there are still more than 50 million people outside of Bangkok – it’s a big number.”

Phuket made perfect sense as a point to expand the LED screen business. However, Mr Preecha wants to eventually get national coverage.

“Phuket has lots of tourists and we’ll be expecting more once the airport expansion project is finished,” Mr Preecha said. “We will want to have locations throughout Thailand.”

When it comes to advertisers accessing that potential growth in the market, it’s about location. And Mr Preecha anticipates that Lucky Media’s early move into the LED screen market will set it up well to help companies target Singaporean clients and others from ASEAN member nations when Thailand opens up as part of that community at the end of this year.

The end goal, at least for the LED screens, will be to establish a central control station in Bangkok. However, Mr Preecha is confident that as new technologies come on line at reasonable costs, Lucky Media will continue to look for options for expansion.

“If you do business, you must feel young. You have to learn more and more – everything is new. If you’re excited when you’re working, you don’t feel tired,” said Mr Preecha, who is now 55 years old.

“Everything is new for me, you find new technology and it’s like playing a game. The more new technology you can have, the more fun you’re going to have.”