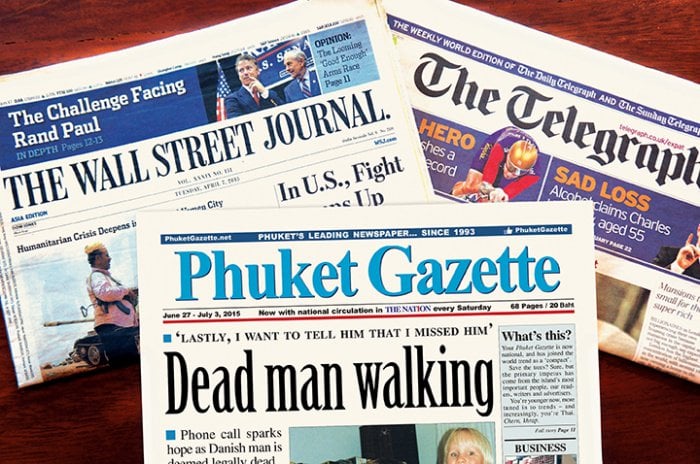 PHUKET: The Phuket Gazette hard-copy newspaper that hits the streets today is truly national in circulation and boasts a re-design to the ‘compact’ format that’s set to be the wave of the future.

By joining the compacts of such esteemed publications as the The Wall Street Journal, The Telegraph, the Times of London, the Daily Mail, Bild and scores of other major titles around the world, the Gazette is now more portable and reader friendly than the stiff-paper tabloids germane to Thailand’s provincial markets.

But the new Gazette is not just a change to a better delivery vehicle; it goes right to the editorial core. You’ll be seeing more investigative news features; more follow-up on crime stories; more business coverage; a general reduction in story lengths; and, our new mantra, more relevance to Thailand. (We know you don’t often look to a weekly Phuket newspaper for world news, wire stories, major league baseball scores or advice on how to fix a work bench.)

And readership of the new Gazette is set to increase more than six-fold, driven not only by the revisions to format and content, but also, critically, to distribution. We’re now reaching out 30,000 readers – not just a Phuket audience where the saturation point for English language print is ‘maxed out’ at 5,000 – including tourists.

We want to deliver Phuket – the good, the bad and the inexplicable – to Bangkok and beyond because the island is important in multiple ways and has long been under-represented in Thailand’s mass media.

What’s good here is good for Thailand. And what isn’t… needs national attention with monitoring and follow-up.

It’s unlikely that Phuket could ever float a genuinely national newspaper without being a part of one. So your full Phuket Gazette, long a part of The Nation, is now literally in that publication, every Saturday morning. You’ll find us in the same places you find The Nation – all over Bangkok (including all government ministries), Koh Samui, Pattaya, Hua Hin, etc. And we’re now aboard more airlines – 14 major ones, including THAI, where The Nation has for decades been a popular daily passenger.

But there is one area where you’ll not see us in The Nation – the Andaman provinces, including Phuket. Here you’ll find us just as you always have, but at more locations, in larger numbers and now, as less of a nangsu pim farang Phuket, in the hands of more Thais.