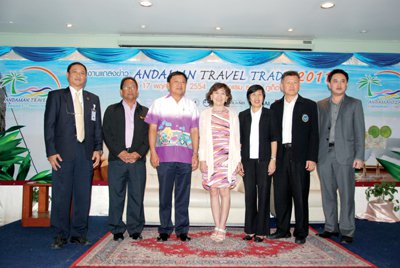 PHUKET: Brazilians are among the latest target group of tourists to be lured to Phuket and the Andaman region.

There were 10 operators from Brazil at this year’s event and the fair hosted 302 tourism operators, in addition to 20 media representatives from 28 countries worldwide.

“Brazil is part of BRIC – Brazil, Russia, India and China. With 200 million people, Brazil has a large population and a good-quality economy,” she said.

“In October we held a road show in Brazil. We see an opportunity to bring them here. Since Brazil is quite a distance from Thailand, each time they come, they will stay longer and spend more money,” she explained.

“Last year, about 20,000 Brazilian tourists visited Thailand, and their destinations of choice were Phuket, Bangkok and Pattaya.”

Ms Juthaporn added that the TAT expects the number of Brazilian tourists visiting Thailand to grow by 20 per cent this year.

Organized by the Tourism Authority of Thailand (TAT), Phuket Provincial Administration Organization (OrBorJor) and the Phuket Tourist Association (PTA), this year’s Andaman Travel Trade exhibition was held at the auditorium hall of Phuket Rajabhat University, the fifth edition of the trade fair, which is held once every two years.

The TAT is spending 18 million baht on hosting the tourism representatives, who also had participated in the Chiang Mai Tourism Forum, before coming to Phuket.