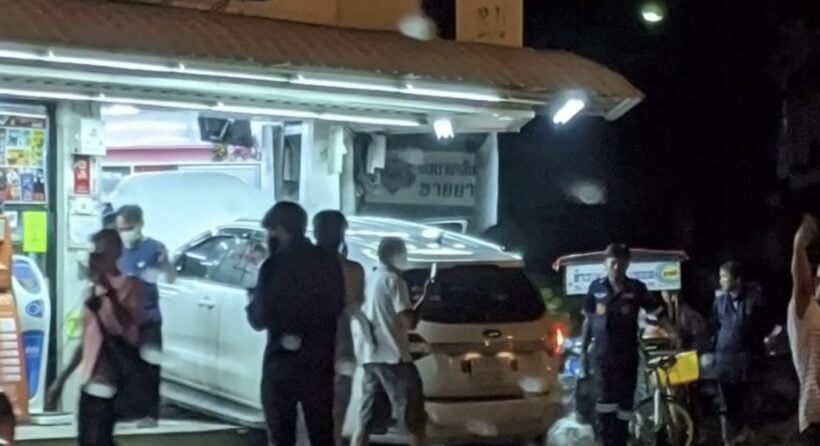 A car has collided with a taxi before losing control and smashing through the front of a local 7Eleven convenience store in Bangkok. 5 people were injured as the car burst through the front of the store. The 7Eleven store is opposite the Phaholyothin Police Station in front of Ratchadapisek 44.

When rescue teams responded they found a white Ford Everest with a Bangkok number plate. The front of the car ended up perched in front of the cashier counter.

The sliding doorway, along with some display stands, were completely destroyed.

The 34 year old driver was still in the car, and the taxi involved in the initial collision was parked nearby, when police arrived. Police say that the taxi was taking a customer at the time and was trying to turn. The Ford Everest was following and allegedly driving at high speed when it crashed into the taxi. The taxi spun around and finally stopped in the middle of the road. But the Everest driver lost control and drove straight into the convenience store entrance.

5 people ended up with minor injuries including 2 of the 7Eleven employees, the taxi driver, his passenger, and the Everest driver.

At this stage police says it’s unclear whether the Everest driver was under the influence of alcohol at the time.