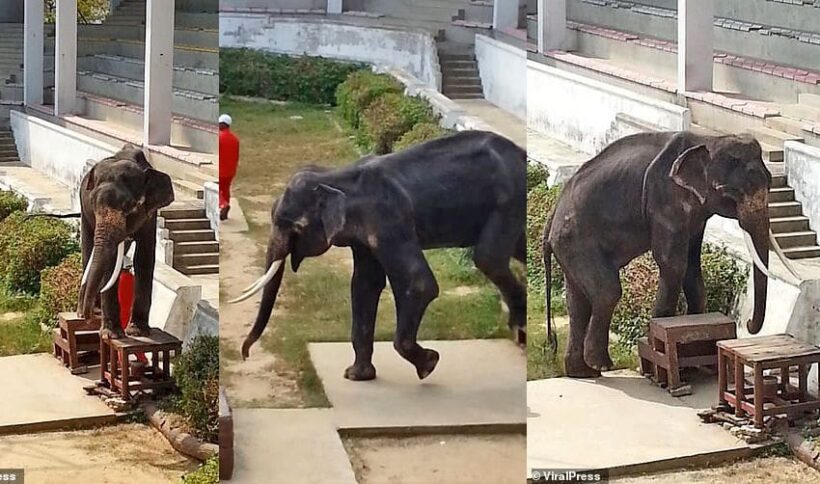 dailymail.co.uk is reporting that an adult elephant has been photographed performing in front of deserted audience seating at Samut Prakan Crocodile Farm and Zoo, just south of Bangkok.

With its bones clearly visible, a female elephant is seen balancing on two wooden tables before being led down and forced to walk across a metal tight rope.

She pauses in the middle, turns around and walks back, according to the article.

The skeletal frame of the small Asian elephant, with its pelvis and shoulder poking through its saggy leathery skin, raised concerns from one visitor who filmed the ‘show’.

“I’ve been visiting the zoo for a long time because I like to look at the animals. But when I visited last week I was upset when I saw one of the elephants. The elephant looked so thin and weak. I felt so sorry. I think he needs help.”

The unidentified tourist thought the zoo might be having financial problems and couldn’t afford to look after the elephant. The Samut Prakan Crocodile Farm and Zoo was built in 1950 as Thailand’s first crocodile farm. It boasts that it is the world’s largest crocodile farm and has expanded to include other animals as well.

dailymail.co.uk reports that the zoo now has over 60,000 crocodiles of different kinds in various pits and features daily shows. Locals say that the zoo was once popular, but in recent years the crowds have dwindled and many shows are now empty.

Visitors who reviewed the zoo, which has a one star rating on TripAdvisor, said they were ‘heartbroken’ at what they saw, although the attraction did receive some praise. Here are some other responses…

“The place is poorly maintained – a lot of the facilities are run down and look like it hasn’t been upgraded in a long time.”

“It’s very heart wrenching to see the animals kept in such poor conditions and God knows if there’s even anyone taking care of them.”

“I literally cried numerous time throughout the day.”

A spokesman for the zoo said that all the elephants at the park are “good”.

“No, no, no. The elephants here are all healthy. They are all good. None of them are thin. They are all fed well. They do shows every day.” Who is Miss Thailand, last weekend’s runner-up in the Miss World competition?