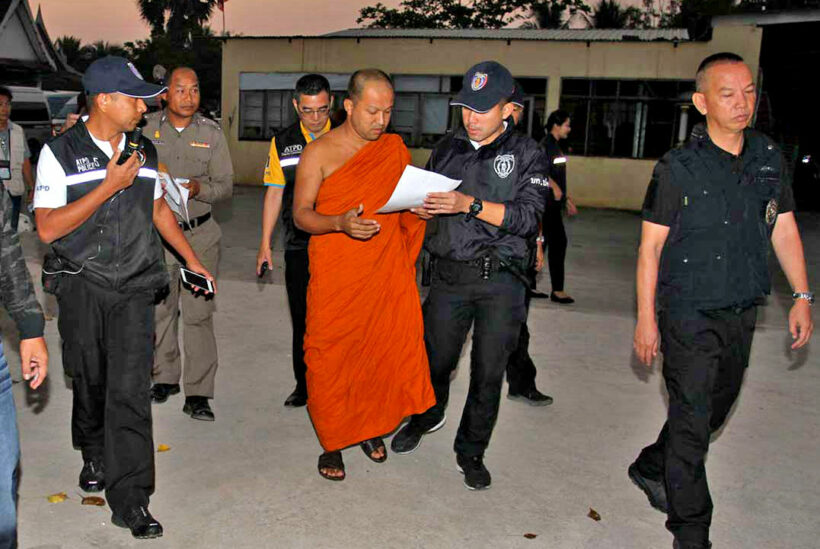 The acting abbot at a temple in Samut Sakhon has been arrested following allegations that he held captive and sexually abused a list of young novice monks. It’s been reported that the youngest was only 8 years old. Samut Sakhon is just to the east of Bangkok, facing the Gulf of Thailand.

40 year old Phra Khru Sangkharak Saksit Kittiko was arrested early this morning. He has told police he denies the allegations and claims “bullies” had made false claims about him. The arrest warrant issued by the Samut Sakhon Provincial Court yesterday charging the man of molesting minors and coercing them into performing lewd acts. The temple has 19 novices and 10 temple boys.

Officials from the Department of Social Development and Welfare led the arrest today at the Wat Pa Suwatthanaram in Ban Phaeo district, escorted by local police.

The arrested monk has already been defrocked and resumed his lay name, Saksit Sonbanphaeo. Testimonies from the alleged victims, their parents and nuns at the temple, have alleged the victims, aged between 8 and 19 years of age, had their phones taken from them to prevent them taking photos or video of any of the activities.

But some of the older victims were able to get photographic evidence and alert their parents, who contacted police.

The chairman of the Help Crime Victims Club Facebook page, Atchariya Ruangrattanapong, accused the Abbbot of binding his victims’ wrists and legs before sexually abusing them.

Social workers were present during the arrests at the temple and have been counselling the boys. The National Office of Buddhism is being asked to investigate whether any former novices were also victimised in the past.