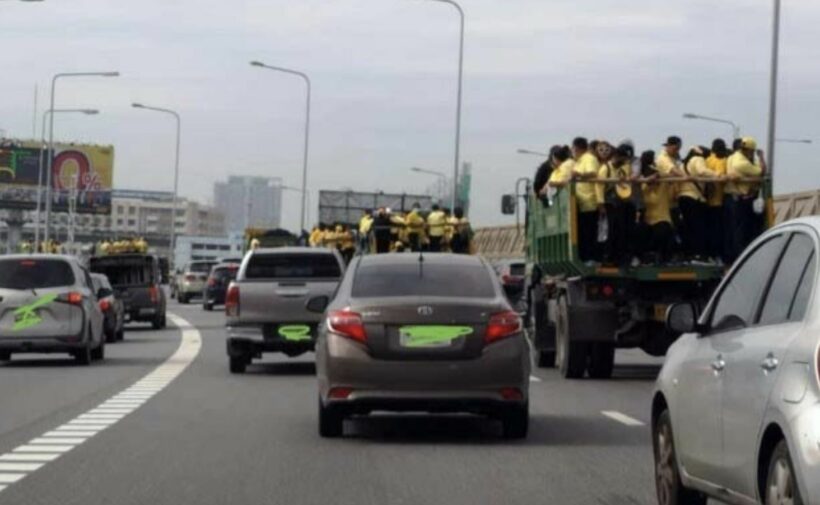 6 truck drivers carrying loads of ‘royalists’ to the Democracy Monument, are facing charges pressed by the Expressway Authority of Thailand, or EXAT. The yellow-clad ‘supporters’ of the royal family stood tightly packed on the bed of Department of Law Enforcement trucks, riding down the Kamphaeng Phet-Yommarat tollway. They were all dressed in yellow, a colour that symbolises the Thai Monarchy. Why they were ‘trucked in’ from outer provinces has not been explained at this stage.

Some drivers took photos of the government ‘cheer squad’ packed on the trucks, questioning if they had broken any laws. In fact, they did. EXAT says the drivers violated the 2012 Expressway Traffic Act which prohibits passengers from riding in the bed of a truck without a cover and 2 rows of seats. They also defied the government’s own guidelines, covered under its emergency decree, preventing ‘large gatherings’ without adequate social distancing.

“The expressway authority has filed police complaints against the truck drivers, who will be fined 1,000 baht for breaking the law.”

Toll collectors claimed that from their position seated in the toll booth, they could not see that people were standing in the truck bed.

The royal supporters, either rent-a-crod or real, were on their way to Democracy Monument for the Royal motorcade, which happened to be planned on the same day as a pro-democracy rally. Some royalists were ironically seen raising their hands in the 3 finger salute, which is used by pro-democracy protesters as a symbol of resistance against Thailand’s military-run government.

Other police groups were shipped in from outer provinces, some even travelled from Phuket under command, to put on the yellow shirts, wave small Thai flags and line the streets along the route of this evening’s motorcade.