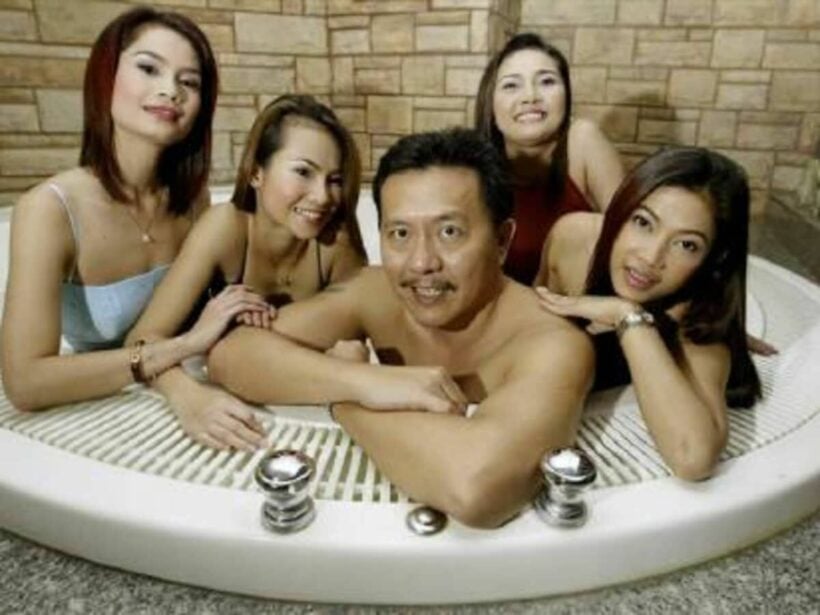 Chuwit Kamolwisit – a colourful character who has been a TV presenter, politician, and prison inmate, but is known as the former “Lord of Soapy Massage” – says that Thailand’s heyday of soapy massage prostitution has passed. The legendary man was tapped to comment by Channel 3 on the story of a massive soapy massage venue that was offered for sale for 470 million baht, a price that many baulked at, and then was snapped up within a day by an eager purchaser.

The giant massage complex had a 50 table coffee shop as well as 104 private rooms in a central location on Arun Amarin Road in the Pin Klao area of Bangkok. Chuwit posits that the steep sales price asked by the elderly owner, who said he had no heirs to pass the business on to, was justified not by the value of the massage business, but by the prime real estate.

He said that the days of men heading to massage parlours, girlie bars, or soapy massage venues are over because now anyone who fancies a bit of fun can find women on the LINE app. (Perhaps he is unaware of OnlyFans and any number of dating or hookup apps like Tinder.)

Chuwit was interviewed by Channel 3 and he talked about the future for places like massage parlours. He painted that future as bleak, saying that all the massage shops have closed due to the Covid-19 pandemic and he doesn’t foresee them being profitable as they reopen. He says banks will be very hesitant to offer loans to these floundering businesses.

The 470 million baht soapy massage deal likely had little to do with massage, but everything to do with what Chuwit called a “golden piece of real estate”. The venue sprawls across 3 rai of prime real estate in Bangkok, where the value of land per square wah is about 400,000 baht.

It remains to be seen what will become of the soapy massage behemoth – will it be reopened as before? Or is it just a prime piece of real estate that will be developed into new condos or something similar?

Bluesofa
2 hours ago, LoongFred said: Some aging mongers go on forever. The soapies need to install wheelchair ramps. I wonder about the practicalities about getting your leg over and up the steps without a wheelchair ramp.
Easterneye
The whores will carry on wherever as long as the corrupt police take the weekly brown envelopes in the joke of a country where prostitution is illegal 😂😂

Bangkok residents of all nationalities urged to come forward for vaccine doses 1, 2 or 3