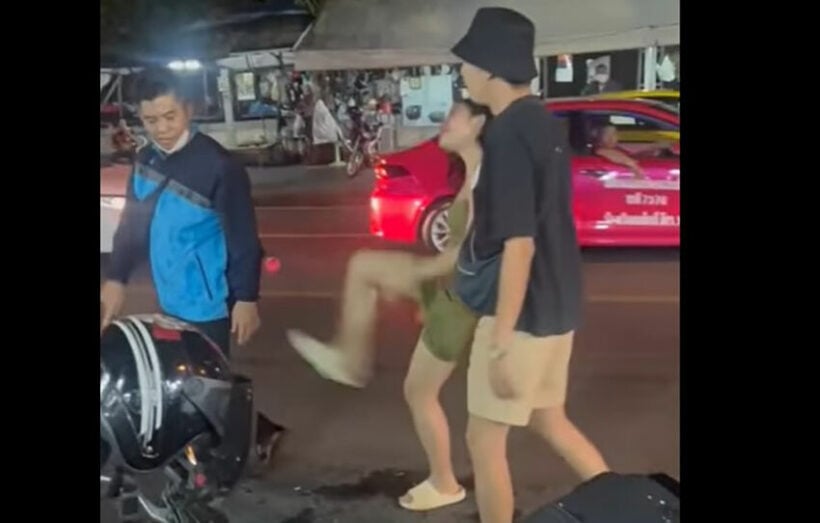 A Bangkok man got more than he bargained for when he poured beer over a woman who turned out to be a Muay Thai boxer. A video of the incident, in which 24 year old Pareploy Saeaia can be seen kicking and shoving the perpetrator, has since gone viral. In the clip, Pareploy can be seen in a wet dress after the man poured beer over her because she refused to have a drink with him. The boxer has since shared the clip on her own Facebook page.

“If this happens to other women, they might choose not to respond. The guy’s choosing the wrong person because I’m a boxer.”

According to a Bangkok Post report, the woman was having dinner with friends at a food outlet in the Huai Kwang district of the capital when the man approached her and asked her to clink glasses. She refused and the man returned 5 minutes later, pouring beer over her as she ate her meal.

Pareploy can then be seen following him out into the street, where she proceeds to aim punches and kicks at him. According to the report, the man did not fight back but didn’t apologise either. Since then, both have appeared at Huai Kwang police station, where they apologised to each other and paid fines of 1,000 baht each.

The Bangkok Post reports that Pareploy works as a Muay Thai trainer, having been a fighter since a young age. To date, she has participated in 50 fights, winning 40 of them. She has also been winning medals at a national level since 2013.

Fundok
8 minutes ago, Skip said: You definitely do not recognize sarcasm do you? Sarcasm: "the use of remarks that clearly mean the opposite of what they say, made in order to hurt someone's feelings or to criticize something in a humorous way" I now understand that the remark wasn't meant to be serious, but sarcasm?
JamesR
On 2/9/2022 at 10:06 PM, Skip said: Not part of the Thai male mentality... especially when drinking... they are the reason that the government restricts alcohol sales. You must mix with some very rough Thais then, I see on so…