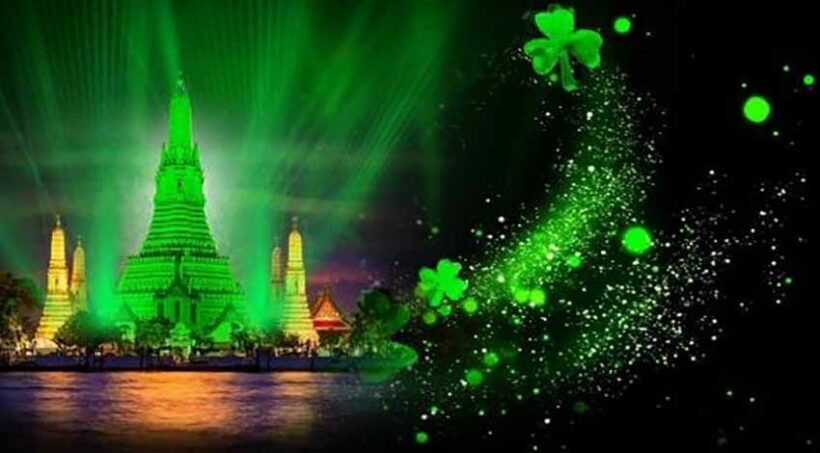 A host of iconic landmarks around the world will celebrate St Patrick’s Day by going green on March 17 – and Bangkok’s Wat Arun will be among them. Thailand’s capital is participating in the “Global Greening Programme 2021” an initiative in which the spire of Wat Arun (Temple of Dawn) will be temporarily lit in green. Also turning green will be the Thailand Cultural Centre, the Conrad Hotel, the Irish Embassy on Wireless Road, and the All Seasons Place shopping mall.

The Irish Embassy in Bangkok has announced the campaign on its Facebook page, and thanked local officials and businesses for their participation.

“The Embassy of Ireland are delighted to announce that Wat Arun – Temple of Dawn – will be going green as part of this year’s Global Greening initiative. Wat Arun is one of Thailand’s most spectacular and oldest temples which is renowned for its more than 1 million colourful and glazed ceramic tiles. It is considered to be one of the most iconic, recognisable, and beautiful temples in Thailand because of its unique design and its outstanding riverside location.”

According to a Nation Thailand report, the Global Greening Programme has been running since 2010, with the Republic of Ireland inviting cities around the world to participate by turning iconic landmarks green to celebrate the country’s national holiday. Other famous landmarks and buildings joining in this year include, the Sydney Opera House in Australia, the London Eye in the UK, the Leaning Tower of Pisa in Italy, and Niagara Falls in the US.