Many Asian nations have put up their hands to host the historic summit with Thailand being a favourite a few weeks ago, citing it’s long term relationship with the US, neutrality over the ongoing North Korean politics, security, ease of media coverage and great photo opportunities.

Who wouldn’t love to see President Kim Jong Un and President Trump dressed up as the cast from the popular soap opera “Bupphesaniwat” (Love Destiny)”?

But this week the ‘most likely’ location is Singapore in mid-June, according to South Korea’s largest newspaper.

Citing diplomatic sources in Washington, the Chosun Ilbo is reporting that Singapore is deemed the ‘strongest’ candidate to host the summit, although there is still a possibility that Trump “who likes dramatic effects” would choose Panmunjom in the Demilitarised Zine at the last minute.

In its front page report, the Korean language paper also said the meeting will most likely be held in the third week of June (9-15), after Trump visits Canada for the G-7 summit on June 8-9.

Trump announced on Friday that a date and venue has been set for his meeting with Mr Kim.

“We’ll be announcing it soon,” he told reporters as he left the White House for a trip to Texas, without elaborating.

The two leaders are expected to discuss the denuclearisation of North Korea during their meeting, which comes weeks after Kim Travelled to the truce village of Panmunjom located in the North-South border to meet South Korean President Moon Jae In.

Kim reportedly wanted to meet in Pyongyang, but was later persuaded to travel to Mongolia, a country which has diplomatic ties with both the US and North Korea and is accessible by rail so Kim can travel there in his bulletproof train.

European countries Sweden and Switzerland have both offered to host the summit, but were ruled out due to distance from Pyongyang.

“Singapore’s neutrality is a draw for both (US and North Korea). Public security is not a worry. Both Pyongyang and Washington have embassies here. The US is also favourable towards a location with prestige and glamour.

“Singapore’s Prime Minister Lee Hsien Loong, however, said on April 28 that the city state has not received any formal invitations or request to host the summit. Meanwhile, the White House said that President Trump will host his South Korean counterpart Moon Jae In for talks at the White House on May 22. 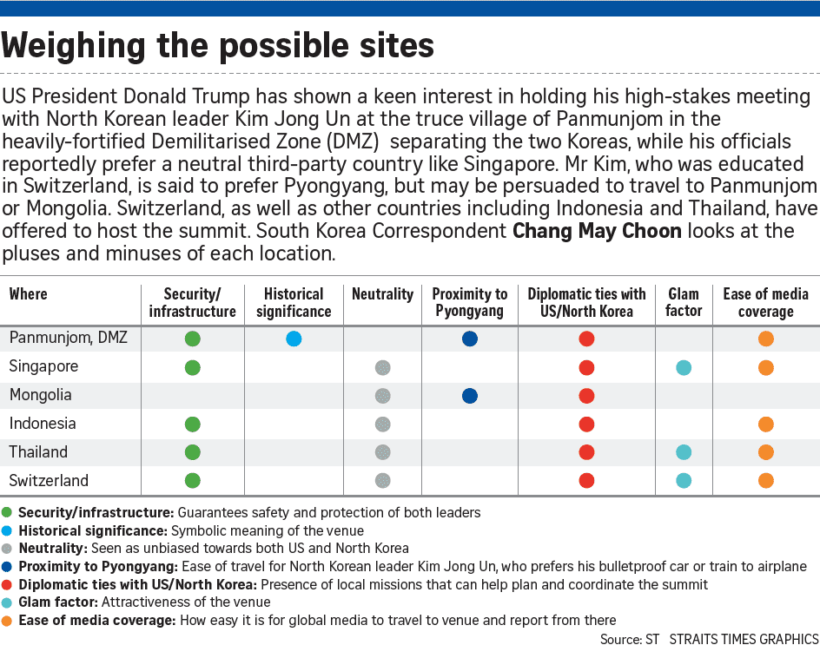 SOURCES: The Straits Times, The Thaiger, The Nation