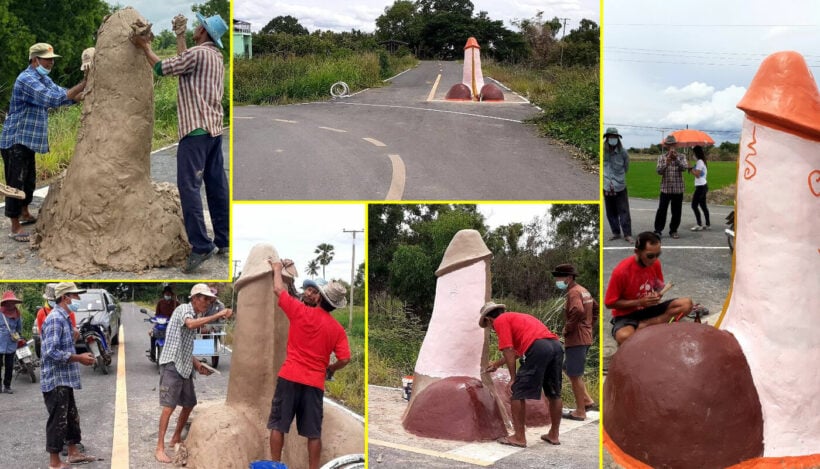 PHOTO: A giant penis statue is erected each year to pray for a good rainy season. (via Facebook Chamnan Kaenthongdaeng)

Yothaka Subdistrict of Chachoengsao province is a fertile low river plain along the Nakhon Nayok River with rich agriculture. Since the residents there are heavily dependant on farming and therefore rain for their crops, locals in one village have a tradition to call in the rainy season by really using their (other) heads.

Bringing new meaning to the phrase “member of the community”, the village has an annual rain ceremony that has turned some heads as before each wet season they erect a giant penis statue in town. The statue, known in Thai as “Palad Khik”, is a local superstitious tradition that the town builds each year. They pray to it in order to bring a successful rainy season for their crops.

The local villagers believe this huge divine rod can work as a divining rod and be used to bring much-needed water to the region. Reminiscent of the scene in the movie Magnolia, they respect the giant member, praying and making offerings to the phallus for water-related blessings such as more rain for their farms and for better water quality in the village.

Chachoengsao, from the Khmer word for “deep canal” is a province that stretches towards the Cambodian border, with a tip reaching the Gulf of Thailand’s water between Bangkok and Pattaya’s Chon Buri Province. The Nakhon Nayok River extends from the Gulf of Thailand in that southwest tip to the village in the north of the province, so the water that flows throughout the village’s canals are often too salty, causing the villagers’ concern over water quality.

The area along the river is mostly low plains with massive rice farms and other agriculture, so good rainfall is needed urgently. Villagers report that the annual tradition has been fruitful in the past in bringing sufficient rain to the village for a productive growing season, which one supposes would make their crops the fruit of their giant loins.

The structure is built in the street, but it is on a dead-end road, so the local village chief claims it will not impede traffic or create any hazard. Besides, like all phalluses, the statue can’t be erected forever and will be taken down as soon as the seasonal rainy season arrives. Once the wetness arrives, the huge phallus will be removed, having completed its purpose.